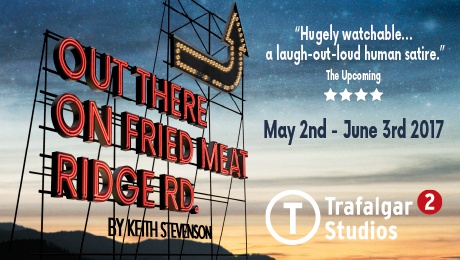 Emma’s review of the original production can be found here

This is a play that has really grown on me. So much so that I am adding an additional ½ star to my original review. The play hasn’t changed much – though there has been a change in cast, with EastEnders bad boy Alex Ferns coming in as New Jersey gangster/poet Tommy. But it feels tighter than when I saw it on the fringe.

There are still some details I would change. Marlene’s bruises – for example – are too distracting. They don’t add to her character well either – she seems like a fighter, not a victim (and casting an actor most known for a part playing an abuser as her partner, they need to consider playing this down).

But this is quibbling over a show that gave me far more joy than I expected from a repeat viewing and even knowing what is coming, that last punchline is a doozy.

This won’t change your life and it won’t make you question everything. But it’s bloody entertaining.

Out There on the Fried Meat Ridge is on at Trafalgar Studios 2, tickets from £20