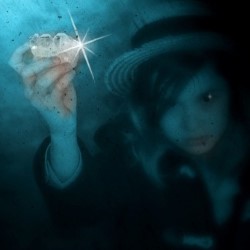 The mood was set by the dark scenery of black brick, interspersed with flashes of light.
Hywel John has written a tightly scripted tale, set in 1950s Edinburgh, it is as brutal and harsh as the humour. The cast of three, Jo Freer, Sian Howard and Molly Vevers, seamlessly swap the play’s main roles and their lines. Their evocative acting, directed by Kate Wasserbrg, vividly delivers the cruelty, violence and poetry of the characters lives. They serve us up a graphic portrayal of the violence, anger and love experienced by the main characters Jenny and Tommy.
The story is narrated by Jenny, who begins, when she is older and wiser, to reflect on her husband Tommy’s state of being. She looks back on how they met in Edinburgh in 1950 when they were children.
The actors’ timing was excellent. This was essential for such smart and rapid fire dialogue. It was also important when the actors changed into each others characters, sometimes interchanging lines or words of a line. The actors, alternating between three main characters,  sometimes spoke in unison like a Greek chorus. And yes it is a tragedy.
Jenny is from an upper middle-class background, her mother and nanny are very proper and repressed. Tommy is from a poor, tough working class background. He’s a street kid; a petty criminal who is in and out of Borstal.
There are some harrowing scenes, balanced by Jenny’s sharp and twisted one liners, which cut very deeply. This is my kind of humour. I enjoyed how a potential danger for Jenny when she was being bullied, turned into dark comedy, which was very witty and brutal.
Although the dialogue is often poetic it is also visceral and real. I felt the anger, the need and the violence of Jenny and Tommy. There is a foreshadowing of a tragedy, but you don’t know what disaster awaits. It is shocking and hard hitting, with an element of the paranormal. It is a play which stays with you long after the last scene.
Seanmhair is on at the Edinburgh Festival until 28 August https://tickets.edfringe.com/whats-on/seanmhair