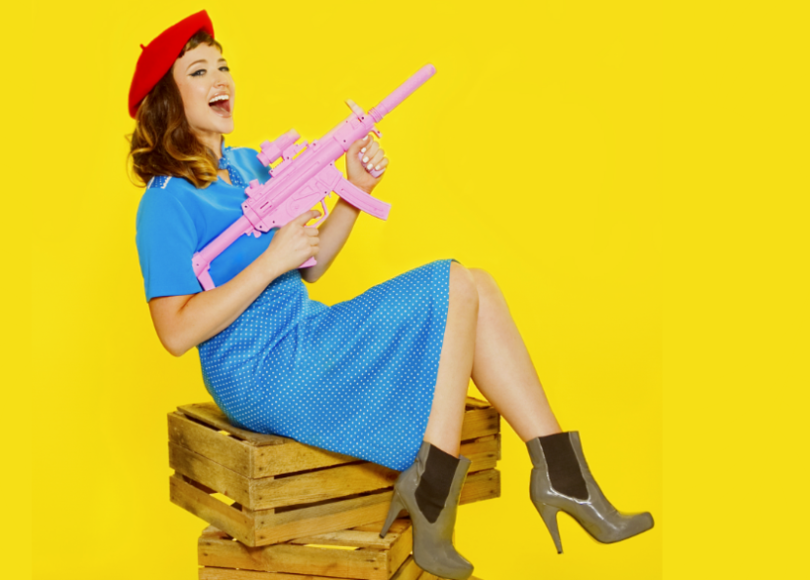 We Are All Complicit

Louise Orwin, the writer, director and actor of A Girl and A Gun, is manipulating us, like all good play/screenwriters. We theatre and cinema-goers, sit in the dark, feeling: good, excited, scared and part of the action. We suspend our disbelief for entertainment. We are exposed as being willingly manipulated for our enjoyment.

Initially, it seems innocuous. The performance is in a lecture theatre. A screen faces the audience. The live action before us is performed by Louise Orwin and a male actor, on the floor of the lecture theatre. The voice-over informs us that this is the first time the male actor has ever seen the script, which directs him and provides his lines using an autocue. Most of his lines and direction are projected onto a big screen, behind the actors. The big screen is up in front of us. It is split into two images: one-half is in black and white, the second half in colour projecting the live action, filmed from different camera angles. The voice-over tells us he has been informed that he should only do what he is comfortable with.

Louise’s character is dressed in a knee-length red dress and cowboy boots. She speaks in a Southern American accent. He is instructed to put on his cowboy costume. We are drawn into a classic western. Louise Orwin has deliberately written a script full of stereotypes and clichés. The female character is a femme fatale, attracted to bad boys; men who use and abuse her. The male actor is the macho “man’s man.”

They use double entendres when he teaches her how to shoot using toy guns. “Pull it closer” “squeeze gently” he says. “Like this” she says moaning seductively, “a little bit harder” and so on. We read the autocue and watch him grab her and kiss her violently as directed. This is followed by more shooting and double entendres.

The screenplay directs him to grab her by the throat, which he does. We watch. The control, abuse and violence pile up. He orders her to put another dress, which she does, turning her back and pulling down the top of her dress. She repeats the dance routine from the start of the play, dancing for him or for us (as the screenplay asks)? She gets shot and dies. She acts being murdered over and over in different ways: hit over the head, on a train track, smothered, strangled, blown up etc. Until it becomes absurd and we are desensitised. He is directed to perform increasingly violent acts against her such as ramming a pistol down her throat. I feel uncomfortable, anxious, appalled, I flinch. The female character being subject to increasingly violent and abusive acts by the male character is for our enjoyment.  This makes me feel complicit like I’m cruel or a sadist. I know we suspend disbelief whilst watching the performance, but…

We have all watched versions of the same story on TV, in the theatre or cinema for our entertainment. Is one of the messages that such behaviour is normalised by dramas like this? It no longer becomes shocking. We are all complicit by paying to watch and enjoying it.  Do we all contribute to the objectification and exploitation of women? We think it’s harmless as it’s not real they are acting. But how does it affect us and our view of women?

The female actor is being controlled and abused by the male character. The male actor is controlled by the script. However, as we have been informed, he can choose whether to act as directed. The male actor initially plays it for laughs. We laugh. Our uneasiness grows as the abuse and violence against the female character is dialled up and the male actor complies. We watch. We are accomplices. We are all complicit, aren’t we? But aren’t we being played? After all, the script has been written by female actor/ director Louise Orwin, she is the one in control.

A Girl and Gun is on until 27 August https://tickets.edfringe.com/whats-on/girl-and-a-gun