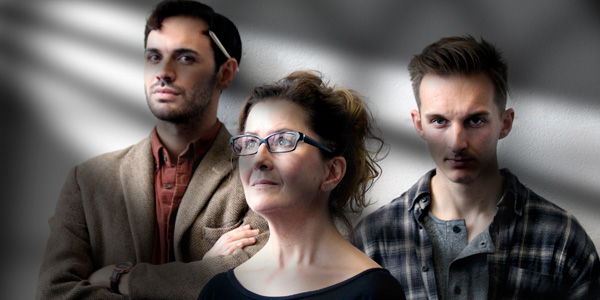 This three-hander by Keith Bunin is a look at not so much the impact of religion and belief but the shield it provides for other issues. Brandt (Mateo Oxley) is a young writer employed by Minister and Theologian Hannah (Kazia Pelka) to work on a new gospel found in Egypt, which could influence how the Synoptic Gospels of John, Luke, Matthew and Mark are seen as this one predates them all.

Alongside a demanding piece of work, she also has a challenging son, Thomas (Michael James) a nomad who can’t or perhaps won’t stay in her presence too long. He has only come back to find the answers behind his father’s questionable suicide before he was born. Thomas has been indulged by Hannah and religion; from his name (after a gospel his parents studied) and his upbringing have been dominated by Hannah’s faith.

Whilst I thought the story was strong it felt lacking in energy. When the conflict does come it barely feels any different to what has come before it. Hannah and Thomas are constantly sniping at each other and the decision somewhere seems to be to hold back the emotion; the trigger of Thomas’ death is treated as an inconvenience rather than a catalyst to the breakdown of Thomas and Hannah’s relationship. His only issue, at this time after so many years, is to doubt her faith?

Despite its two hours running time, everything seems to happen so quickly, even Brandt and Thomas’s relationship seems extraordinarily rushed, which is a shame because their scenes and chemistry are one of the most convincing aspects of the play. The opposites attract mantra being entirely believable as Oxley plays Brandt with warmth and humour but it doesn’t take long for the anticipated grief for his father and the sense of wanting to please him before he dies (taking Thomas to meet his parents not only shows his belief that Thomas is the one but the only one worth meeting his family he holds so dear) and James as Thomas is at his best during these scenes though plays a manic wanderer well. I could sympathise with Thomas at time but I could never warm to him and Bunin has written Thomas as distant rather cold, something a lot of writers struggle with. The strongest love will never keep Thomas in one place, as Hannah’s love for him shows.

Pelka’s Hannah just didn’t work for me, it wasn’t the performance entirely but I just struggled to accept this great minister and theologian in front of me. The issue is we didn’t see anybody’s other side; their careers, their families and their treks across America. Claustrophobia thrives in fringe theatre but it just felt so stagnate that I found myself longing for more of the theology!