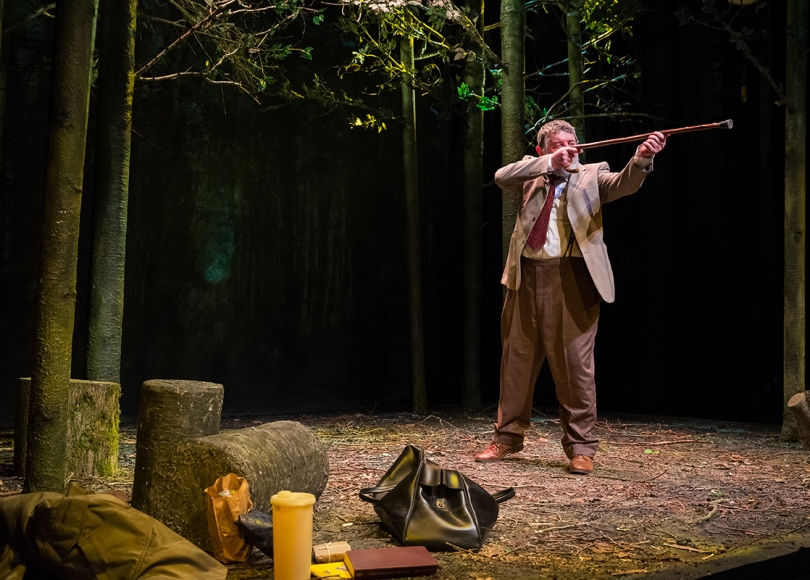 To commemorate the centenary of the end of the First World War, playwright Owen Thomas has teamed up with the Torch’s Peter Doran to create a story of friendship, redemption and a bleak and poignant reminder of the cost of that great tragedy.

The Wood takes place in a beautifully designed French woodland setting which juxtaposes neatly with it also being the location of one of the many disastrous events of The Somme. 50 years on from that infamous bloody battle a surviving veteran returns in 1966 to the spot where his friend fell all those years ago, in a bid to lay the ghosts of his past to rest, both figuratively and, as it turns out, quite literally. 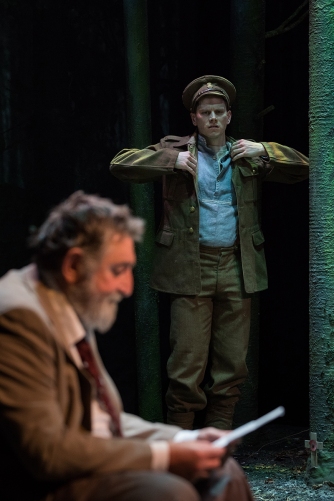 The play opens with Dan, an ageing veteran of the 38th Welsh Division, rambling away in a typically Welsh fashion, going through his orange squash-sodden belongings. What begins with a comic edge gradually peels back as the tragic details are drip-fed to us in a vivid, poetic language. We don’t revisit the light-hearted elements we saw at the start and it might have been nice to have had an extra sprinkling of that humour to break up the intensity of this meeting of war-torn souls.

Ifan Huw Dafydd as Dan commands the stage with his thick Welsh timbre, later joined by an ethereal, powerful performance by Gwydion Rhys as the restless ghost of Dan’s friend Billy, who is doomed to roam the now peaceful woods for all eternity in his army regalia, serving as a message that nature can recover from war but humanity is harder to rebuild.

The two friends made a promise all those years ago to look after the other’s loved ones in the event of death, which Dan has honoured, but circumstances have led him back to this spot. You feel a great deal of sympathy for Dan having lived his life in someone else’s shoes but as this fascinating existential conversation between spirit and man progresses you wonder if Dan, perhaps suffering from survivor’s guilt, was glad he got to live at all. The play is cleverly layered with moral tales of responsibility, of legacy, and the reliability of accounts of history. It challenges the viewer to question if it is right that the fallen are remembered as legends and heroes whereas there are still visible veterans today, themselves victims of equally futile endeavours, who are forgotten and left to rot on street corners.

The subtle use of multimedia, real war images and birdsong gives the play a rounded, authentic feel, and the literal ‘echoes of war’ sequence, though quite prolonged, was effective in the raw emotion it portrayed. Ultimately The Wood is a refreshing, heartfelt, Welsh perspective the like of which you don’t tend to see and it provides a necessary reminder of the harsh realities and human cost of war and how tragic it is that so many young men like Billy left their families behind to sign their death warrant.

The Wood is on until 1 March. Tickets from £8.50 https://www.torchtheatre.co.uk/torch-theatre-company-presents-the-wood/