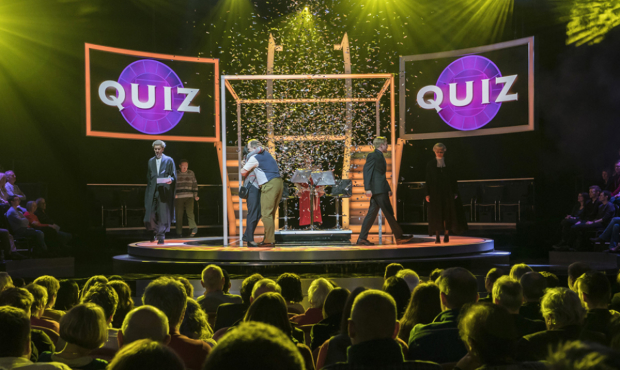 Quiz is James Graham’s look at the Who Wants to Be a Millionaire scandal that leads to a criminal court case. Major Charles Ingram, following the success of his brother in law and wife applies to be on the show and finds himself accused of cheating when he becomes the third person to win a million pounds, casting doubt on his conviction but not casting enough doubt on what the anyone had to gain by bringing criminal charges against him

Daniel Evans’ Chichester Festival Theatre transfer realises quite early on that there isn’t really much of a story about one of the biggest television scandals to hit the UK, even the return of the show without its original host Chris Tarrant, now replaced by Jeremy Clarkson, hasn’t resonated with audiences members and the lack of starry names don’t help.

The use of other popular quiz shows such as The Price is Right, Bullseye and Take Your Pick to explain why the quiz was successful with audiences (like us!) prove a distraction from the story, along with the pub quiz on seats which takes place throughout the show and the set which focuses on video design and interactivity. It is just too glossy. The audience should be concentrating on the story, not a question they are trying to remember the answer to or remembering not to lose the keypad in front of them.

There are some great performances from Paul Bazeley and Sarah Woodward as the prosecution, Gavin Spokes, and Stephanie Street as the Ingrams and Mark Meadows in a range of roles. Keir Charles plays Tarrant, Des O’Connor, Leslie Crowther and Jim Bowen whilst resembling Larry Grayson most of all but he gets the hamminess of Tarrant and what made WWTBAM the success it was. Greg Haiste as producer Paul Smith is an endearing and complex performance but let down by the fact that Graham doesn’t have enough evidence to cover their side of story-does Tarrant think they cheated and if they didn’t why is Paul Smith so keen to prove they did?

The Ingrams apparent desperation for money is explained more in the second half but crucially never clears up audience doubts about Ingrams from the first half, the Ingrams, particularly Diana and her brother Adrian Pollock prove they will stop at nothing to get on WWTBAM, why wouldn’t they cheat? Instead, Graham finds himself getting distracted by 9/11, the 2001 election and the Iraq war rather than the issues presented in the second half-reasonable doubt on the Ingrams guilt. If the real-life defense was as compelling as Sarah Woodward perhaps the Ingrams would have been found innocent.

Quiz is on until 16 June at Noel Coward Theatre https://www.delfontmackintosh.co.uk/tickets/quiz/