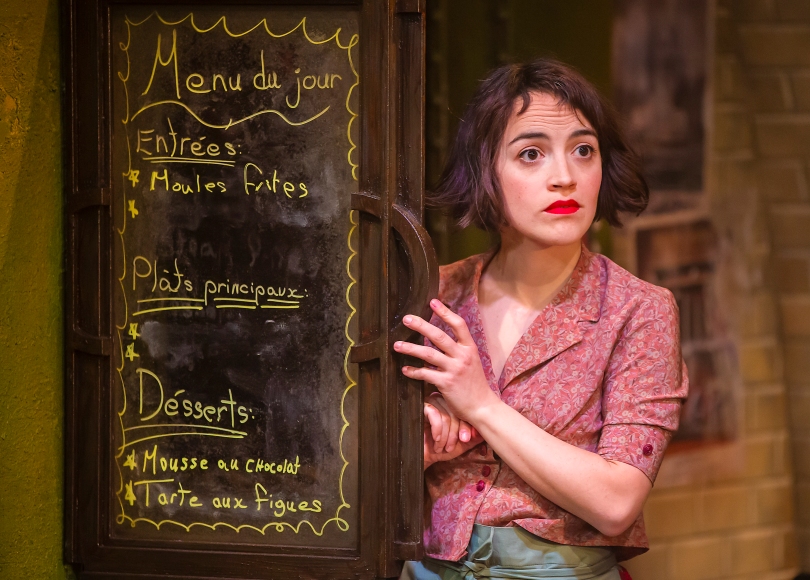 This is exactly how a small scale musical should be done, though Michael Fentiman’s production feels anything but small.

This is the UK premier of the Broadway musical which was adapted from the 2001 film. Amelie Poulain’s life in Paris and the people she meets is the whimsical centre of the story, set in 1997. After the death of Princess Diana on the streets of Paris, Amelie sets out on a mission to do some good in the world (perhaps to even be the saviour of humanity?); reuniting a childhood time capsule with its owner and playing matchmaker to her friends in the Two Windmills café. However Amelie however keeps herself at a distance from love, so after many chance encounters with the photograph collecting, Nino may lead her to bravely step beyond her own boundaries.

The titular role of Amelie is synonymous with Audrey Tautou’s cinematic portrayal, however French-Canadian actress, Audrey Brisson makes the role completely her own. She has an immense charm and humour and a stunning singing voice to match her leading role.

The rest of the cast is made up of actor musicians, who provide a soundtrack as beautiful as anything an orchestra could produce. There is no weak link within the cast; each and every one delivers a sensational performance. Special mention must go to Caolan McCarthy who, as Elton John, brings the first Act to a show stopping end.

This production is intricate, creative and slickly finished. The stage craft is impeccable with sound (Tom Marshall), Lighting (Elliot Griggs), Design (Madeleine Girling) and movement (Tom Jackson Greaves) all en point; every creative delivering a Paris that is warm and enchanting.

Amelie is a magical show; with puppets, flying lampshades, a singing gnome and terrifying figs. I couldn’t fault it, and judging from the audience reaction, they couldn’t either.

Amelie The Musical is on until 18 May at Watermill Theatre and continues on tour to New Wimbledon Theatre http://ameliethemusical.com/