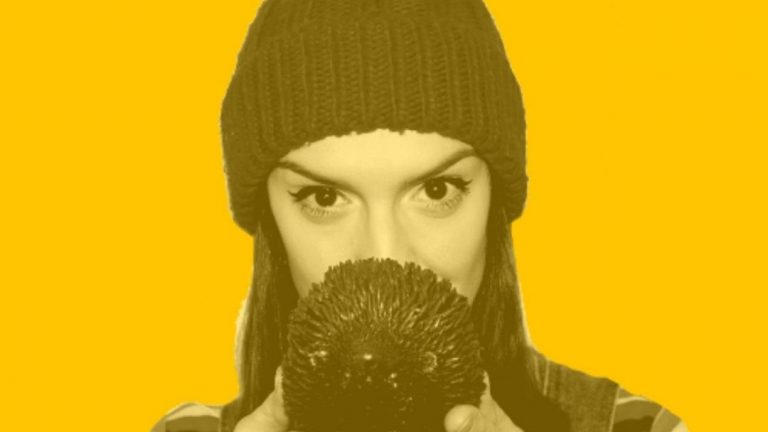 The Lion and Unicorn seem to have a type – and it is charming. It really is the best word to sum up their latest fringe triumph, Boxless Theatre’s Hedgehog.

Zoe Grain as Manda held my attention throughout. The pace is somewhat dizzying and the scene changes take a little getting used to, but once I  had buckled in for the ride, I didn’t find myself lost, confused or distracted.

Hedgehog is not a dance piece, but the fluidity of the movement between Manda and the two shadows in her life – who represent everyone from her mother to the snooty woman who got her fired as well as her inner monologue – was stunning to watch. It was beautifully choregraphed by director Georgia Richardson using props, physical movement, clothing changes and even puppetry both imaginatively and energetically. Everyone involved in this production brought talent and energy, but the direction here really deserves special credit for its audacity and for delivering on it.

The staging was superb. Costumes hung at the back became intrinsic plotlines, even representing integral characters. No prop was left unused, but equally none was used unnecessarily. And the movement – again I can only describe it as both fluid and dizzying – was superlative. You kept thinking – surely something will go wrong – and it never does.

For the most part, Hedgehog is the story of a normal young woman’s regular insecurities. She tried to be more like the cool girls and seemingly fails as much as she succeeds. She seeks love in all the wrong places and until the – incredibly moving – end, doesn’t see the places where it is gently offered.

Manda is someone I can relate to. Her whole performance is – essentially – a soliloquy and the section on convincing yourself that it is the wild life that is making you happy, not dragging you down – felt very real. Manda’s pain is everyone’s at some point. She clearly combines the gawky awkwardness of adolescence with the hindsight of someone who has lived through the pain – just.

There is so much life in Manda, and so much colour in her back story that I feel there could be a long way further for this project to explore. But in an hour and ten minutes, I felt her brittleness, her softness, her defensiveness and watched those defences drop. It was a tour de force by Grain, but equally is only possible with the exceptional support of Lucy Annable and Emily Costello as the ubiquitous Them.

Hedgehog brought life to one young woman’s struggles and the universal nature of them too. It made me laugh and made me cry. And it made me want to go home and hug my Dad. So I did.