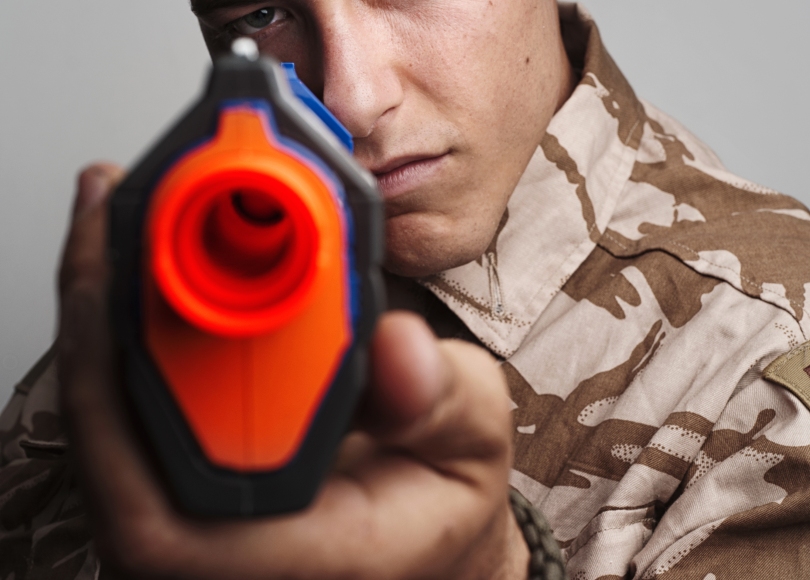 I commend the writers Taz Skykar and Ross Berkeley Simpson and the director Toby Clarke of Warheads for attempting to tackle the topic of PTSD for soldiers and how it affects their loved ones. Warheads focuses on how Miles’ life as a soldier, after surviving several postings to Afghanistan, resulted in PTSD, loss of army colleagues and conflict and questioning about his masculinity and what makes a real man.

I suffered from PTSD following a life-threatening and life-altering RTC, so I know how, as a symptom of PTSD, the boundaries between reality and nightmarish memories of the past or hallucinations can be blurred. I also experienced the overwhelming terror that something awful would happen to me again and the resulting hyper-vigilance which often took control of my life. Unfortunately the structure of Warheads meant that the blurring of boundaries was often confused, so that it wasn’t clear when and whether Taz Skykar as Miles was working with his therapist or whether the writer and director were hopping back and forth over the timeline of incidents in Miles life, or whether Miles was experiencing a PTSD flashback, reliving traumatic events or hallucinating.  Perhaps this experimental approach was an attempt to give the audience some insight into some of the symptoms of PTSD. If so it had some success, by confusing me. Except for an obvious scene involving Craig Fairbrass’ Captain Deex from Miles’ regiment, I did not know whether Miles was hallucinating about his best mate Mory, played by Hassan Najib, having a nightmare, or having flash backs where he was transported back to the triggering event(s) and was reliving them.

The production and the cast are to be congratulated for their efforts. The character development of Skylar’s Miles and his Jekyll and Hyde behaviour after his returns from his tours in Afghanistan was convincing and the music helped to create the mood, especially when the soldiers were posted to Afghanistan.

However I believe Warheads needs a lot more work. It could benefit from restructuring and more work to allow the tension to be ratcheted up and wound down in a more realistic manner, at the moment it is rather disjointed.  On several occasions the staging was poor; in various scenes an actor, whose back faced the audience, was blocking the other actor from the view of the audience, so you could not see the expressions on anyone’s face as they talked. This lost any connection there might have been with the audience. There was also too much exposition; was it necessary for the therapist to list the symptoms of PTSD at the beginning of the play, like a teacher signposting to us that Miles had PTSD and how it affected him? Surely the audience learnt this, as the play evolved, from the actions and behaviour of Miles and his interactions with his mates, colleagues and fiancée Tena, played by Klariza Clayton? The other characters were fairly one dimensional, including Tena’s stereotypical gay best friend Coby, played by Joseph Connolly.

Ultimately, Warheads succeeds in disseminating information about PTSD for soldiers, concluding with the hopeful message, for those in mental health crisis, that they can start to achieve some equilibrium and peace if they reach out and seek help.

All photos by Marcus Kartal