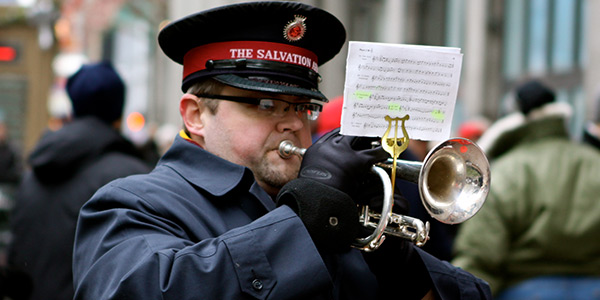 For younger theatregoers the name Philip King may not mean much but on the postwar period through to the seventies he was a highly successful writer, and is best remembered for the farce “See How They Run” which has been regularly revived, and was also filmed, since its original production.

Not being a huge fan of farces I was therefore half-expecting to be subjected to a saucy caper. To my relief, “Go Bang Your Tambourine” is not some stage version of “Carry On” but an interesting family drama centred round David, a shy, nineteen year-old boy whose mother has recently died leaving him alone in the world except for his absconded father. Both the boy and his mother were in the Salvation Army and the contrast with his libertine father, who returns for the funeral, provides both the humour and conflict in this play. As if this were not enough, the arrival of the attractive Bess as a lodger complicates matters still further.

The second act did stray more into the area of farce as both father and son vie for the attentions of Bess but there is enough dramatic tension to counteract this. But the third act brings matters to a bittersweet finale which steers this play spiritually closer to the gritty “Northern” dramas popular at the time. At a superficial level this is then a family drama but it does go deeper in its analysis of families and comes up with a Larkinesque conclusion.

Good acting throughout. Mia Austen is charming and funny as Bess, John Sackville as the father is an engaging and persuasive cad and Patience Tomlinson, playing a Major in the Salvation Army, provides good support. The acting honours have to go though to Sebastian Calver who gives a very convincing performance as the bereaved and painfully introverted David.  All of them, and the piece, well directed by Tricia Thorns.

Once more the Finborough Theatre has succeeded in digging out a purportedly dated play (though first performed in 1970 this is apparently its London premiere) and bringing it to life in a manner which is faithful to the playwright but does not alienate a modern audience. Kudos to them.

Go Bang Your Tambourine is on at the Finborough theatre until the 31st of August. https://www.finboroughtheatre.co.uk/productions/2019/go-bang-your-tambourine.php