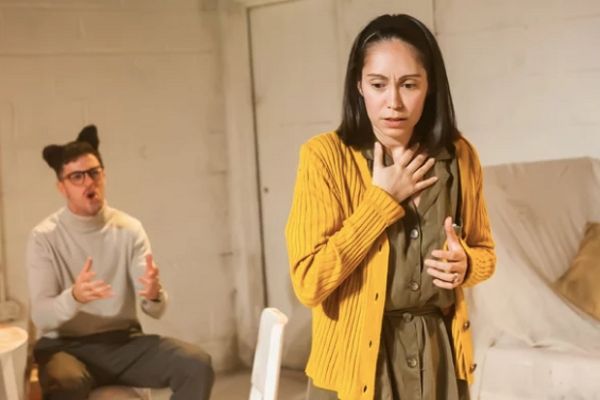 Sometimes I wake up in the morning and all the missed opportunities of my life stare at me, grind me down until I’m nothing. Nothing but dust.

James Mannion’s new play “Mites” currently on at the Tristan Bates Theatre, is variously described as “darkly comic”, “absurdist” and a “psychological thriller” but…

The problem with absurd theatre (and I note the “ist”) is that it is not best at delivering strong messages in a subtle manner. It is difficult to write a coherent play which can move from absurdity to dealing with a sensitive topic such as mental health.

“Mites” presents us with Ruth (Claire Marie Hall) a bright, Stepfordish abandoned wife who lives with her intellectual cat Bartholomew – drolly played  by Richard Henderson – and is visited by Ken (Goerge Howard) from Pest Control who might, or might not be, her husband. If he is, she does not recognise him at first. At this point the play is most reminiscent of early Ionescu, something like “The Bald Prima Donna”.

However as the play morphs into a thriller the earlier success of the comic scenes gets in the way of accepting this as a serious scenario. It is hard to make the jump from talking cats and a surprisingly suburban mite family to the manipulation of the “mentally vulnerable”. Ruth has been presented as a scatty, cheerful character and never really develops into a “victim”, except as a potential victim of an absurdist plot.

If the point of “Mites” is indeed to deliver a strong message about mental health issues, then I’m afraid the absurdism simply gets this lost in translation. The audience is not primed to see Ruth’s mental problems as the play’s core which is really provided by the psychological thriller element.

“Mites” is an interesting experiment and an entertaining watch but I cannot see socially-conscious absurdism as an avenue worth exploring much further. It is on until the 26th October at the Tristan Bates.