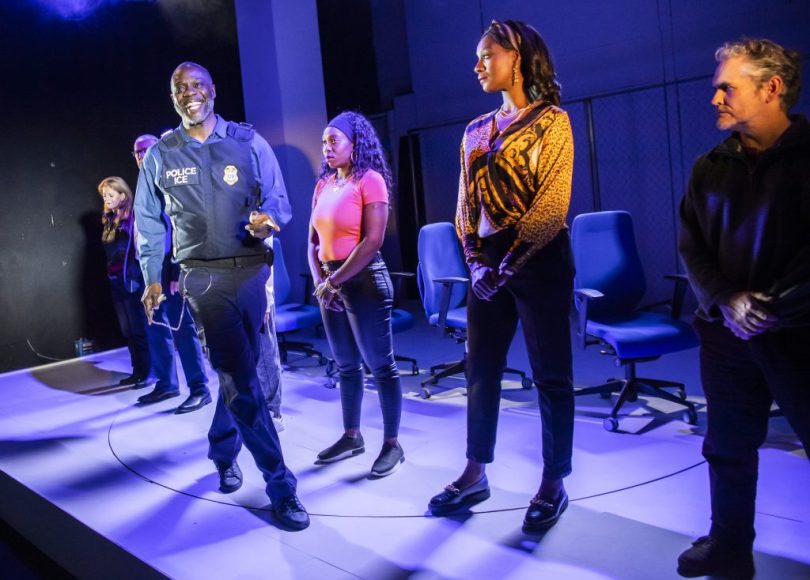 The design has a flavour of corporate patriotism to it with “office blue” wheely chairs, and a strip of red, white and blue LEDs, Brechtian projections throughout don’t let us forget that this is theatre. We know this is a play about deportation, we know the end destination of every character we will meet. This is theatre, but the words are real. These are the experiences of individuals within a system. Often when thinking of deportees, we envisage them being “other”, going back to some terrible ‘crime infested place’ (because of course the US/UK are crime-free…), but this is about UK citizens being deported from the US. All have been caught up in the criminal justice system for one reason or another, ranging from the trivial to the shockingly violent.  Citizens of a country who break the law do their time. But if you’re a resident with any sort of dual citizenship or potential connection to another country, you run the risk of double punishment. Doing time for the crime, but then having the buck passed on which country should have you after. Abdulrazzak skillfully presents these testimonies in a way that is not for us to judge. This isn’t about the injustice of “innocent” people, or who “deserves” to be kicked out of a country, but more the environment that is created through a political platform that allows for humans to be stripped of their basic rights and be stuck in citizenless purgatory, sometimes for years, whilst at the will of bureaucracy and rule-enforcers.

Verbatim plays can often feel static with a view of just letting the words do the work, but Baker’s direction and Pankhurst’s movement really lift the words off the page and allow these experiences to feel live without always being literal. A slick ensemble fizz and pop into different people, memories, and settings. We are led on this journey through Curtis (Nicholas Beveney), our ICE (Immigration and Customs Enforcement), cool officer as he moonwalks, lip syncs, charms and commands the stage. Our MC is reminiscent of the Joker within Theatre of the Oppressed, building rapport with the audience, pointing out our own privilege, but whose side is he on? It’s not that he doesn’t care, but as an ICE officer, we are constantly reminded that he’s just there to enforce the rules. He didn’t set out to be that way, and just sort of fell into it…well we’ve all got bills to pay.

In an age where satire is apparently dead, absurdity is alive and well. As verbatim, appearances from Trump write itself. Strictly-come-dancing-esque interludes of US&UK political leaders provide hilarious relief , with Duncan Wisbey’s Trump hands and Miranda Foster’s rigid Teresa May robot arms deserving of a special mention. The entire cast are agile and adept at taking us from the personal to the world political. There are stories of love, lies, loss and the really bloody funny, as you would expect from anyone’s life. What becomes apparent is the relationship between money (of course), and immigration. Afterall, it is called Immigrations AND Customs enforcement. This is about an economy where people happen to get caught up in between. There is a whole industry in the name of national security, and immigration, from running the buildings used to detain individuals, lawyers, and the cost of sorting your paperwork. It is inevitably those without access to money who lose.

On stage Trump and Boris flippantly bat baked goods between each other as real lives are stuck in a gut wrenching purgatory of bureaucracy whilst their cases are dealt with. Sometimes it takes years, and when you’re finally put on a plane there’s no time for goodbyes. “Back” in the UK,  the epilogue is bittersweet as life of course continues with all its ups and downs for our generous contributors to this show. Ever important in an openly ‘hostile environment’ prone to dehumanising, this pacey rollercoaster of a play which through embracing theatricality ultimately humanises those we meet along the way.

On until 21st March 2020 https://sohotheatre.com/shows/special-relationship/