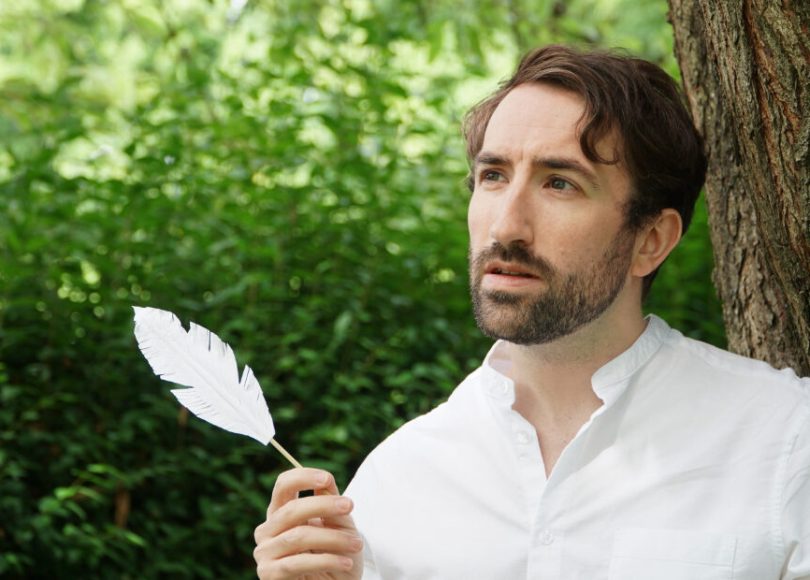 Sitting in a garden in Kensington I was treated to an enchanting and magical performance of the Scottish Play.  Blackbirds flitted across the garden and in the background, we heard an ambulance siren and then a baby wail. This all lent to a surreal atmosphere whereby perhaps a spirit from another time had come through a portal. The time of course was Elizabethan and I was now privy to the inner thoughts of Will Shakespeare – the bard. The bard was looking for inspiration on how to write his new play during plague-time England. James V1 of Scotland, no less, has asked that he write the play about his homeland, and the bard has developed writer’s block. He needs the support of us – the audience in the garden.

Of course, there was no curtain up. Whilst we were all having a nice glass of prosecco and chatting, the bard (who had been anxiously strutting up and down) began to talk to us. From this moment onwards I was hooked. The play, which is littered with many historical references to Shakespeare and his life, was delivered at a fast pace.  The intimate and interactive nature of the setting meant that we, the audience, were completely immersed in the performance.

The parallels with the current COVID situation, within our second year, made the script quite poignant at times. There were references to the bard’s own brother dying of the plague and a reference to how those, who could leave the city, did so. These references resonated with the situation over the last year. (I hasten to add that the play was filled also with lightness and comedy).

Our bard for the evening was the impressive and energetic Luke Farrugia. He managed the audience deftly (and the unpredictable environment) improvising with humour. A highlight for me was Luke’s singing – such a beautiful melodic voice. Luke has trained in musical theatre and this was evident. He moved between different characters with great ease. His scary ‘witch voice’ made me feel he was ‘too close for comfort’.  Amazingly, Luke practised this role at home with direction being offered by Zoom (and he has worked the past 6 months in a call centre, learning his part in his spare time). This was therefore a great achievement.

This is the second play by Victoria Gartner (Writer and Artistic Director) produced within the COVID pandemic. Victoria has written and directed work about Shakespeare’s life and times internationally to critical acclaim. Her first play (King Leonardo) was written during the COVID situation in 2020 and it was a journey through Shakespeare’s greatest hits. This second play, however, is more retrospective and set in the New Year of plague quarantine.

Each play is unique and each bard (there are 19 of them, male and female) interprets the play differently. Performances might be in a garden, a patio, a school, a care home, a pub or any other open space available – in sunshine or rain.  There are public performances also available. The company has brought entertainment to many isolated people during the pandemic- especially older people. The portability and accessibility of this play is its unique selling point.  It is a play for everyone.  Just as Shakespeare would have intended.

For information on how to see a performance follow this link Bard in the Yard | Shakespeare comes to you.

Bard in the Yard is a project created by Will & Co.

Will & Co is a theatre company creating shows and workshops around the life, times and works of William Shakespeare.