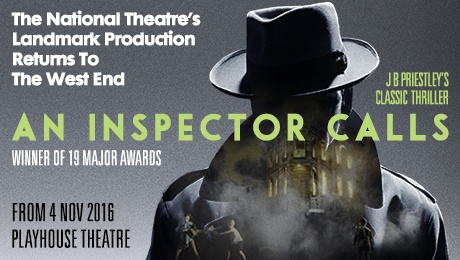 Stephen Daldry’s National Theatre Production An Inspector Calls made its debut in 1992 and twenty-four years later it returns to Playhouse Theatre after many revivals but what is the long lasting appeal of JB Priestley’s play and why does this version remain so popular.

I am one of many who studied this play at GCSE, I sadly never saw a production of it at the time but as a piece of writing I actually enjoyed compared to my GCSE Shakespeare study of Macbeth, which I resented, and it has taken me a long to truly enjoy Shakespeare. The piece, written in 1945, resonated with me because it tackled hypocrisy and felt like a good old-fashioned crime mystery story. It has been said that the success of An Inspector Calls, the production won multiple awards in 1993/94 and has been seen by over 3 million people worldwide following performances in USA and Australia plus numerous West End residencies.

An Inspector Calls premiered in 1945 in the USSR, as a suitable British venue could not be found until 1946 at the New Theatre (now the Noel Coward Theatre) and has a cast including Alec Guinness and Ralph Richardson before a Broadway production in 1947. The production has a bit of revival lull until a 1986 production with Hugh Grant and Graeme Garden at the Royal Exchange, Manchester.

The production has been well represented on screen, with a film adaptation for 1954 and a recent television adaptation in 2015, with Ken Stott, Miranda Richardson and David Thewlis as Inspector Goole.

The success of the production in 1993-94 lead to a rediscovery of Priestley, a writer who was destined to be seen as dated and irrelevant to a playwright who is now recognised as a great social commentator on British society and the hypocrisy of the upper classes.  Priestley’s Time and The Conways (1937), directed by Rupert Goold, was produced by the National Theatre in 2009 and Bill Kenwright produced a touring production of Dangerous Corner (1932) in 2014, starring Michael Praed.

The Old Red Lion is presenting a world premiere of JB Priestley’s Benighted this December, proving that an appetite for Priestley’s work hasn’t diminished.

An inspector Calls is on at The Playhouse Theatre from 4 November – 25 March.