Max Gill’s adaptation of Arthur Schnitzler’s Reigen has its basis in his interviews with people about their sex lives but what makes this four hander more than just a sex and the city tale is the use of La Ronde. La Ronde is a massive wheel at the front of the stage, which determines who will play the next character. As the press night showed it is a risky approach as one of the actors, Leemore Marrett Jr had to watch his fellow actors; Lauren Samuels, Alex Vlahos and Amanda Wilkin, as he was never picked by the wheel leaving this 90 minute play as a three-hander before he got to appear in the final scene because one of of the actors may have had to do a two hander alone!

The issue is not the wheel as a gimmick but the fact al the tension and excitement comes from its spinning rather than the stories themselves. The cynic in me also worries it will play on audiences’ natural curiosity and audiences will come back time and time again just to see different interpretations of the role.

Gill’s writing links them well but for a play about prostitutes, incest, psychosexual trauma it is just so vanilla, the scenes are always duologues and whilst on paper the concept of four actors being prepared, yet unprepared to play roles as determined by the wheel sounds exciting making the roles gender unspecific doesn’t give any nuance to the performances, especially when actors play some parts as feminine and others as masculine. It also oozes with humour, which feels awkwardly placed during this mostly dark play about sex and sexuality. 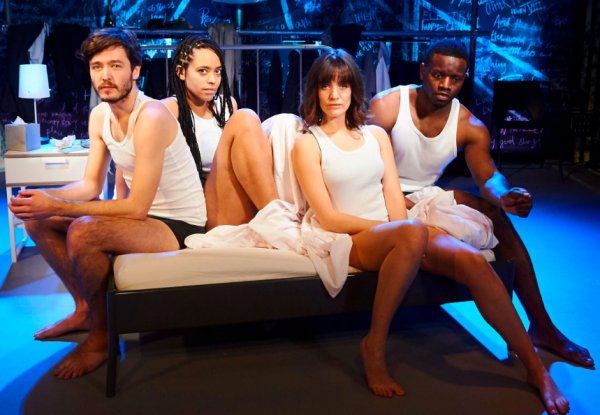 What saves this from being a gimmick and not much else are the performances. They feel bold and sexy in an at times unsexy play. I don’t want to pick out any actor for their performance as a particular character as the fate of the wheel may mean they never play them again but all four proved they were more than just pretty faces and hot bodies.  Lauren Samuels, who I adored in Vanities, proves she can do straight plays and is not just a musical talent and unlike recent fate productions such as Almeida’s Mary Stuart or RSC’S Doctor Faustus there wasn’t a clear ownership of role, whilst I would be intrigued to see the characters as played by a different actor there wasn’t any sense that any one actor was suited to the role and I must commend Gill’s direction, where it is clear that all actors have been given the opportunity to make the character their own because Gill hasn’t written the character for a particular actor or even particular gender.

‘Wheel of Fortune’ gimmick and great performances distract the audience from the pedestrian storylines. This play must have been bold and daring in its 1920 premiere but for a 21st century audience it fails to shock.