Terry Johnson’s madcap tribute to his mentor, which transfers to The Bunker from Hampstead Downstairs is benefiting of Ken Campbell but lacks the context and history audience’s may need 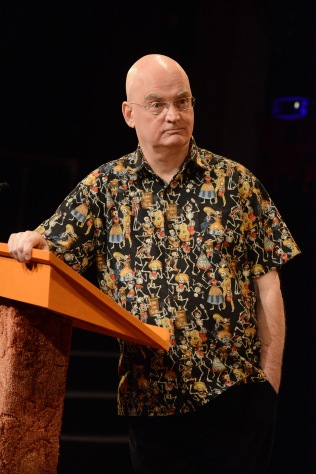 Johnson’s lecture style, amongst comfy chairs and cusions the audience are free to lounge on,  feels very at odds with Johnson’s previous work as a writer and director. Whatever his faults he is a great biographer of famous figures such as Sigmund Freud , Dali (Hysteria), Jack Cardiff (Prism), Marilyn Monroe, Albert Einstein (Insignificance) even if many of the encounters he writes about never happened. In Ken their relationship seems based on such a loose foundation that it is quite fathomable that despite being presented as this great mentor they only met and worked together a handful of times. There is a telling scene towards the end at Ken’s funeral (Campbell died in 2008 at the age of 67) in Epping Forest where Johnson admits he wasn’t sat with close family or friends. Johnson also seems to think this method is theatrical, a lecture still needs to be engaging but Johnson appears to lack the confidence to keep the audience engaged and ensure the jokes have the best timing.

The production is a series of anecdotes but the main tale is Johnson’s account of having a minor role in Campbell’s epic adaptation of Neil Oram’s autobiographical play The Warp, which played for 24 hours straight and saw the lead actor only have two hours off. 23-year-old Johnson juggles writing his own play, attempting the plumb the toilets of a ruined cinema that served at the play’s venue and dealing with Campbell’s quite punishing, yet laid back (nudity played a big part in making the story work) approach to directing this production.

Johnson isn’t an actor anymore and it shows. He fluffs lines that are in front of him and the production’s strength is Jeremy Stockwell as Campbell, other actors in The Warp and even himself, who bears an uncanny resemblance to Campbell and is clearly comfortable with acting and improvising, which seemed to relax the rather stiff Johnson towards the end of the performance but I do think this production could have benefitted from having a better actor as Terry. Lisa Spriling’s direction sees Stockwell manically move amongst the audience as a young man and slowly move into old age, whilst losing none of his energy or charm. Whilst the personal approach gives this production a gravitas it may not have with a cast it might feel tighter, the madcap antics would feel less forced and ultimately it would give Johnson an opportunity to be best at what he does; the writing.

In all honesty, I am amazed Johnson’s account of being in The Warp wasn’t suggested as a book, which I think would have been a more appropriate use of Johnson’s skills and his lack of performing expertise. Ken Campbell, judging by the number of oddly placed laughs on press night, still has his fans, admirers and mentees but the references to Nina Conti, who he mentored and seduced when she was 25 and he was 59 make little sense to anyone who hasn’t seen her documentary ‘Her Master’s Voice’.

The play serves as a nice introduction to Ken or for those that knew him a reminder of the impact his work had on many performers, writers and directors but he deserves a better tribute that is as risky and daring as he was.