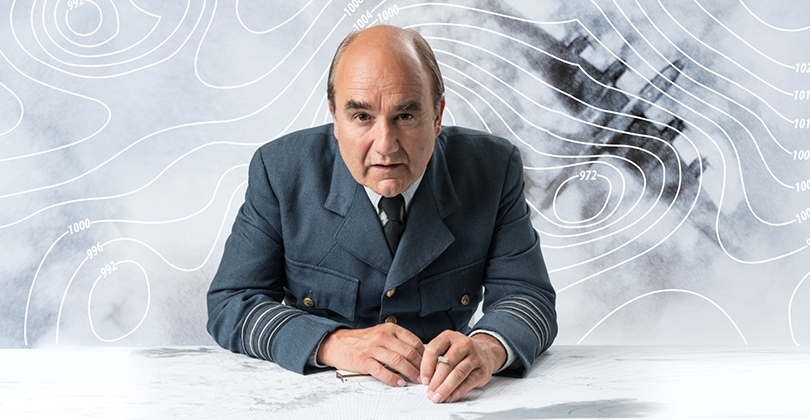 Even those with the most basic knowledge of history will know how this play ends but David Haig’s Pressure strength is in its tension.

David Haig also plays Captain James Stagg, a dour Scotsman and skilled meteorologist working alongside Philip Cairns’ Irving Krick, a brash and bold (both in personality and physicality) American physicist whose forecasting allowed Gone with the Wind to film it’s Atlanta fire scenes on schedule. Eisenhower wants to land his forces in Normandy on 5 June and we start the play on 2 June.

Krick is a man who isn’t afraid to look back on previous forecasts and has got the Allied troops this far whereas Stagg is a great believer in uncertainty, whether it is in long-term Northern European forecasting or the impending birth of his second child as his wife’s blood pressure makes the safe delivery uncertain.  Krick picks and chooses forecasts to match his case for a 5 June landing whereas Stagg predicts a violent storm that could ruin the landing and possibly the war’s outcome for the allied troops.  This clever play often makes light of the British obsession with weather, it is because it is so hard to predict and ever-changing that for us it has become an interesting subject.

Laura Rodgers and Malcolm Sinclair provide support as Kay Summersby and Dwight Eisenhower, their close relationship seems more than professional with Summersby given up on marriage and children because the war got in the way. Summersby is also the only person (and woman) Stagg can confide in as he worries about his wife and child as she risks her career to reassure Stagg that his wife is safe.

Pressure is the story of what happens when the pressure of life and work gets too much without an outlet, the characters barely sleep and I felt exhausted at the thought of this high-pressure role, it is also a multilayer story with strong performances across the ensemble. Sinclair is perfect as Eisenhower, a man who doesn’t understand forecasts but puts all his trust into Haig’s Stagg whilst never giving his all to Rodger’s Summersby, a woman who dreads war end because her life will no longer have a purpose.

Haig is an accomplished actor but in Pressure, he gives the audience what they want, fast-paced dialogue set over a few days with incredible performances. It is a stunning piece of writing which makes an event in history all too human and personal.  Pressure is a warm, funny and heartbreaking look at what we do when we juggle our professional and personal struggles but it is also a fascinating snapshot of an event so well-known but misunderstood in the amount of planning and pain (Sinclair is particularly moving when he talks of meeting the young men he may be sending to their deaths)

Originally produced in Edinburgh and Chichester in 2014 Pressure was worth the four year wait for London audiences. If you miss it at the Park then it is moving to West End in June 2018, including a performance on the 74th anniversary of D-Day.

Pressure is on at the Park Theatre until 28 April