I often debate what makes a show immersive. Does it have to be multiroom like The Great Gatsby or Alice in Wonderland, all who began their lives at this venue, or is it simply about interacting with actors in a promenade or single room like Land of Nod or For King and Country? Sadly Shotgun Carousel’s Divine Proportions, which markets itself as an immersive dining experience is neither immersive or very interesting.

This female lead production invites its audiences to come in their most sparkly, godly clothing and dine like the Gods and Goddesses that we are. We start downstairs with homemade bread with balsamic vinegar and olive oil and then after a rousing rendition of Like a Prayer we are lead up to heavens to feast and bask in pleasure. 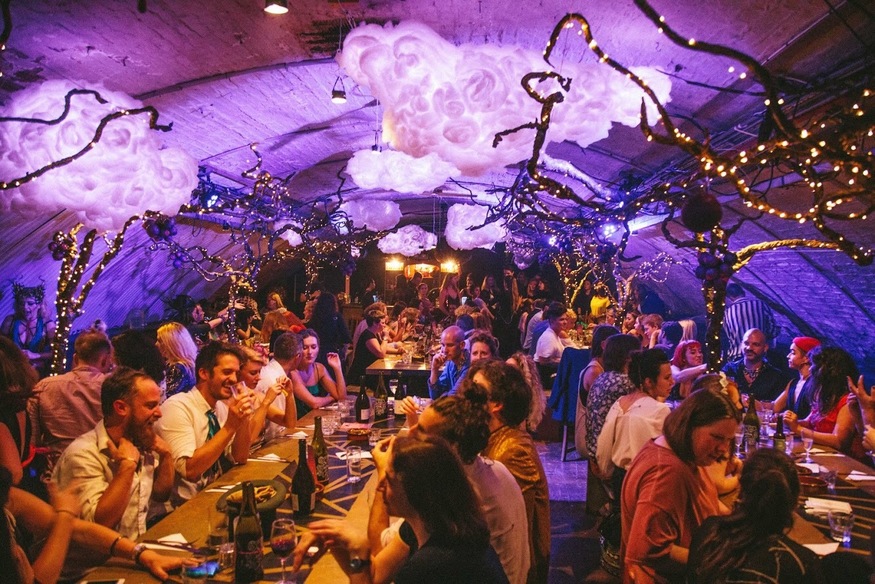 There are many problems with this production; to have the dining experience and production go on at the same time will never work. Audiences are encouraged to drink (One audience member vomited before the show even ended and had to leave) and be merry as well as come in large groups so people do what they do over dinner, they catch up, talk and laugh. Usually, an audience would do this pre/post theatre but here Dionysus finds herself shouting over a crowd like she is in a rowdy stand up club rather than a theatre performance. Leah Kirkby as Dionysus (or Di) is a great performer but does not have the gravitas to ensure the audience have behaved and crucially the venue hasn’t produced enough adequate sound to ensure the audience can hear what is going on. It is disrespectful to both cast and audience to not ensure the show can be clearly performed. In traditional theatre, the sound would go up and the room would go dark. It would have made more sense to have the audience eat, then be treated to the performance.

There is no story to be immersed in, we are meant to be mortals amongst maenads and Goddesses but it is basically a very expensive burlesque cabaret performance as the cast sing/mime along to ‘sexy’ songs. The staging means that depending on where you sit you miss a lot of the performance. There are minimal cast/audience interaction during the show and Immersive works where there is a connection and unfortunately, this show never provides that.

It commits the worst crime; it is just a boring production that wastes its talented cast and even the menu, which is high quality doesn’t work with the show (Is guinea fowl a sexy food?). As my friend who saw it in previews, two months ago, with me said “It is even worse now” and it has no idea of its audiences. It is possible to have a good time here but only depending on your company.

I am all for more female-led theatre and theatre that doesn’t put people into boxes but for a show about desire, the lack of male bodies alienates much of its straight female and gay men audience. It doesn’t need to be Dream Boys but we could have had an Apollo or Zeus amongst Aphrodite and Persephone.

This show desperately needs to look at its future options; giving the audience a chance to follow different Goddesses for example and maybe moving away from the dining element, which is a distraction rather than an asset. As it stands it is not immersive, it is not entertaining and it is a show that has mislead audiences looking for memorable theatre experience.

Divine Proportions is on until 12 January https://www.thevaults.london/divine-proportions. Tickets from £35-50

There is a clothing optional performance on 24 November https://www.thevaults.london/divine-proportions-clothing-optional