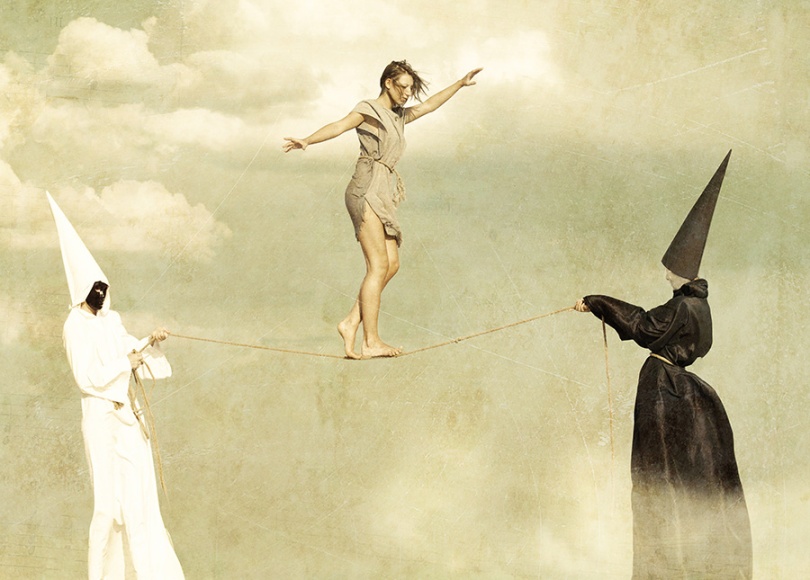 Theatrical Niche’s production of Bertolt Brecht’s The Good Person of Szechwan is a bold piece to do for any theatre. The play is set in China and is about prostitute Shen Te and her quest for goodness and morality, in a world where there is none. It is the sort of thing you’d imagine the Young Vic putting on with a ambitious set. This production, as part of the Illuminate Festival at New Wimbledon Studio, doesn’t have the luxury of such a set but it does have a versatile and strong cast with some fantastic puppetry.

Puppetry can go either two ways; absolutely fabulous like Joe Wright’s A Season in the Congo at the Young Vic where the white government were depicted as puppets or absolutely terrible such as the childish and cartoon-like The Trial of Ubu (Katie Mitchell, Hampstead). ‘The Good Person…’s strength is using puppets to depict the Gods, rather than as other humans.  The production does feel like an epic yet in the programme notes Venetia Twigg (adaptor and one of the actors) states that she cut it down to 35 pages from 110!

The four actors (Twigg, Lucinda Lloyd, Matthew Springett and Noah Young) manage to be multiple characters, stage hands, puppeteers and barely break a sweat. Lloyd particularly stands out in the dual role of Shen Te and her male alter-ego Shui Ta but it wouldn’t work without such great ensemble support.  It is the sort of ensemble work that makes anyone consider being actor, it looks such fun but ultimately it is a questionable play to put on. Brecht’s story is difficult because it is so unsatisfying there is a build up with love, hate, goodness and badness whilst also looking at gender and morality, it is a story that just can’t conclude;  it’s aim is to stay with you, make you questions your loves, your hates, your goodness and your badness. To portray such a story so minimally requires a lot of skill and I both look forward how good Theatrical Niche would be in a bigger space.

The Illuminate Festival is on until 28 May; http://illuminatefestival.co.uk/shows/