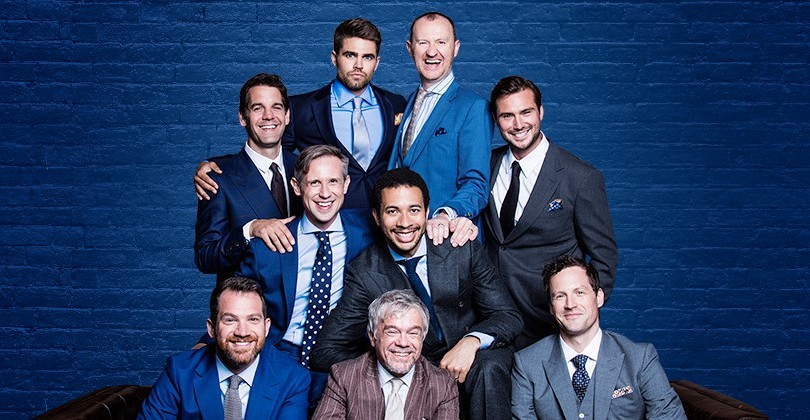 Written in 1968 Mart Crowley’s The Boys in the Band is revived at the Park Theatre, with the all male cast giving one of the finest ensemble performances of 2016. What should be terribly outdated is a forward thinking, hilarious and thought provoking production.

In terms of tone it is very odd play, the first half is all bitchy comments, campy frivolities but as more and more guests arrive it becomes clear that the laughter, as it often is, hides the pain of self-doubt, secrecy and misunderstandings leading to a dark, and quite distressing for a modern audience, second half. The direction, by Adam Penfold is very seamless and tight, though the in the round staging means you may miss some key scenes if sat in at the sides but Rebecca Brower’s set feels both of its time and stylish enough to be a vintage inspired apartment of 2016.

For me the star is no doubt Ian Hallard, a handsome actor who I first noticed in Great Britain he comes out of the shadow of being Mark Gatiss’s spouse. His Michael is very believable as a man whose self-hating demons appears as soon as faces from his past do and in a world where homosexuality is mostly accepted in the form of same-sex marriage and society’s attitudes Crowley’s work still rings true in 2016. There are still men who would prefer not to be gay, men who believe others are hiding in the closet, hiding from societies judgement.

Over a course of the evening Michael reveals that not only does he hate himself but he clearly hates his friends, desperate to bring out their unhappiness too. Hank and Larry; a couple always on edge where one has left his wife and children and the other doesn’t want commitment, Bernard dealing with his race as well as his sexuality (Lockett’s performance is heart-breaking and his acknowledgement that he has and will always have it worse than his effeminate friend Emory is devastating and a reminder that not much has changed in nearly 50 years for black people either) and Donald, a man constantly under analysis from his shrink. Gatiss’ calm and measured performance as Harold is needed in such a hectic play and his light relief with Jack Derges as his stripper Cowboy gift from Emory.

It should feel like a historical piece and in many ways it is and I am pleased that the Park Theatre, along with National Theatre’s upcoming revival of Angels in America, is looking again at these ground-breaking plays. The production uses a lot of imagery from the original production and film and as a piece of writing, despite the tonal shift, it is so subtle and so graceful you forgive Crowley for shocks because it is ultimately beautiful, in a harsh way, look at people; a group of men who happen to be gay without a hint that homosexuality is to blame for their unhappiness but their own feelings towards themselves. It is also rarity of its time where nobody dies and whilst the ‘Tragic homosexual’ narrative is very much here it works because it is the reality of its time and the reality of now.