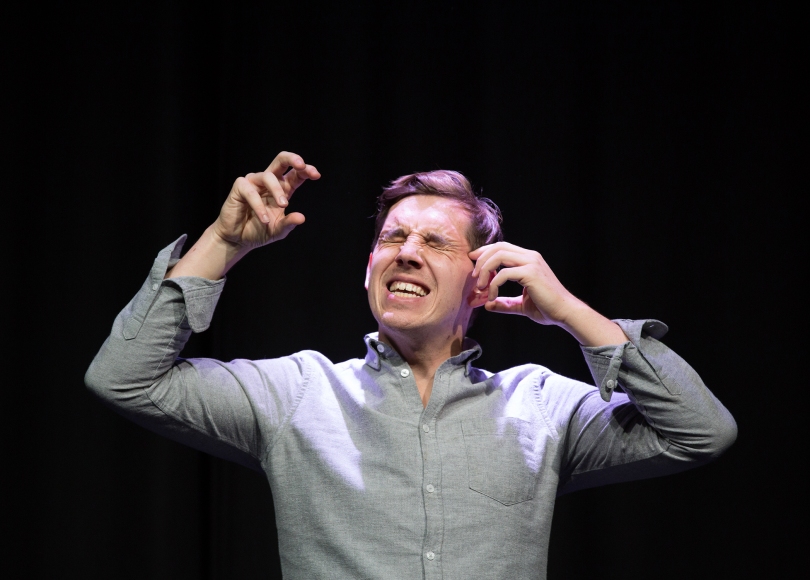 Kane Power may sound like the forgotten antagonist in Glen A. Larson’s Buck Rogers in the 25th Century, but in truth he’s the creator of one of the Vault Festival’s closet gems; an affecting and effective reflection on his mother Kim’s bipolar disorder. She’s both subjectified here, in song, in monologue, and subject making; the trauma that’s necessitated this talking cure for her son’s damaged id.

It’s a sincere attempt at tracing the pathology of his own pain. It’s therapeutic art. And who doesn’t like a bit of that? After all anyone who tells you they haven’t been royally fucked up by someone is either boring or lying.

Power’s keen to stress this is a show in development. It’s a snapshot of a live situation after all; a 20 year struggle between mother and son with new material presenting regularly. We get an anecdote as recent as last Christmas. “This show may fail” as an exploration of these intangible, perhaps intractable difficulties, he confesses. It’s a sweetly defensive opener, an early show of vulnerability.

In my performance there was a smile for the pretty girl in the front row with a notepad whom he summarised may be writing this review instead of me, but there’s no need to flirt with the critics on this one. The show’s charming all on its own. Bourgeoning it may be, but the material and design is strong enough that it already feels fully-formed.

One’s particularly struck by Kane’s observation, adopting his mother’s persona, that the theatre, uniquely, offers the best simulacrum of a bipolar sufferer’s experience – the live flight of ideas, the transition between different plains of consciousness, the collision of fantasy and reality. But the sobering, perhaps even humbling insight, is that theatre normalises such thinking. That metaphor imbues the piece with an important bit of destigmatising purpose. It’s not didactic, there’s not a trowel in sight. It just feels like a show where form and content are perfectly aligned.

That content is grand, thanks to Power’s assured multimodal performance; a show that employs live electronic composition as the aural bridges between monologues. Occasionally these overlap, thanks to some nifty sound design. The resulting aural psychedelia mimics the cluttered consciousness of the bipolar sufferer. It’s an imaginative means of dramatizing what for many will be an abstraction. Such craft and illumination deserves a big audience. Go see it.