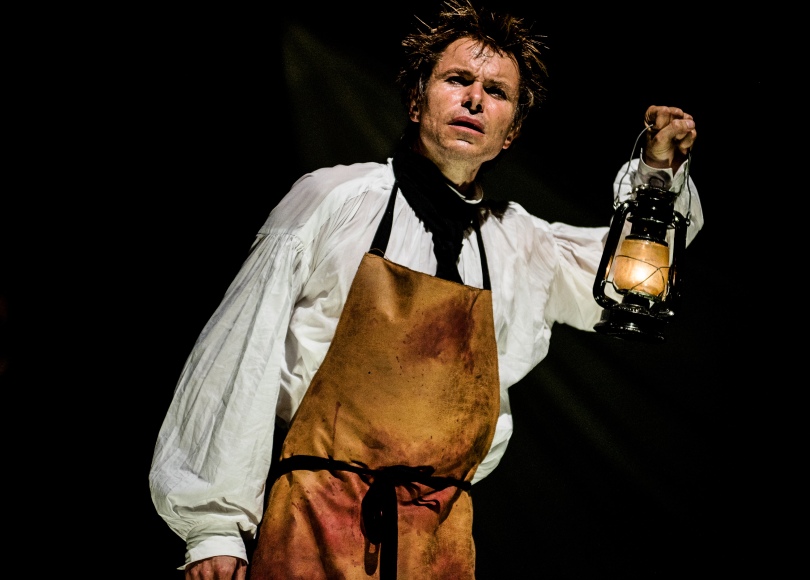 Celebrating its 200th anniversary this year, Frankenstein continues to be a thought provoking piece exploring the ideas of ambition, the limits of science and the responsibilities of parenthood. Questioning the relationship between God and Mankind, a crazy scientist tests his ability to create life and instead brings a murderous monster into the world.

Blackeyed Theatre’s production strips away any added features from adapted movies, shows and other projects about Victor Frankenstein and simply tells the tale as Mary Shelly originally wrote. Fans of the assistant Igor may be disappointed as he does not make an appearance. However, we the audience get the opportunity to watch Victor Frankenstein (played by Ben Warwick) grow from adolescence to adulthood. We watch his close relationship to best friend Henry (Max Gallagher) and his developing feelings for his cousin Elizabeth (Lara Cowin).

Just before the end of Act 1, the familiar story that the majority knows well begins to appear as Victor’s creation is born. Using puppetry to bring the monster to life is an unusual decision for this production but soon becomes unquestionably a brilliant decision. In the Japanese style of puppetry known as “Bunraku”, a maximum of three actors at a time control the full size puppet. The physicality used truly allows the monster to be its own character and you find you stop looking at the actors and easily begin regarding the monster as its own actor. The monster (voiced brilliantly by Louis Labovitch) begins to learn and mimic those around him and you can watch as he develops into a fully understanding being. Expressing the monster with an almost childlike physicality allows the audience a chance to see the monster as a misunderstood, rejected creation who is ignored by its “father” and cast out alone.

The unusual Staging by Victoria Spearing soon becomes an intriguing aspect of the performance for the audience as it changes from a ship to the machinery of Frankenstein and more. Interestingly the stage itself is simply wooden beams with a white cloth running across. However, it is the actor’s manipulation of the materials available that transform them to the audience into whatever is required for the current scene.

Tying the performance together is the eerie musical score constantly drumming away in the background. Ron McAllister’s score lends the performance another level, allowing the music to have a close and more involved relationship with the piece. Using instruments within a scene or their voices to increase the atmospheric effect, the actors make the music a part of the overall production.

Overall it is an interesting and unusual performance in relation to the usual crazy “IT’S ALIVE” angle of Victor Frankenstein we usually see on television or the big screen. However, if you can follow along with Victor throughout his childhood scenes in the first act, you will not be disappointed once the gruesome monster begins to steal the stage. Whilst Victor continues to narrate the story to you, the audience can watch as his life is torn apart.

A wonderfully talented cast showcase comedic timing, fantastic character acting and brilliant physicality throughout the performance and you find yourself drawn in further as the piece goes on. Touring and selling fast, you can pick up tickets here. Go along and see whether Frankenstein will defeat his monster.