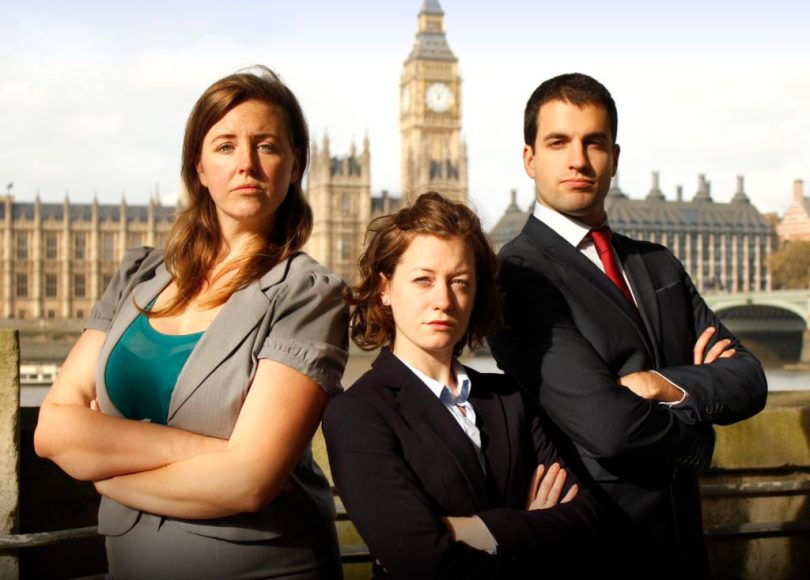 Whilst I am not the biggest dance fan (I went to a Great Gatsby ballet once though and I LOVED Some Like It Hip Hop) I am a bit of politics geek and End of Dance seemed like it was going to be a damning satire on governments sadly didn’t live up to its potential.

The main issue with End of Dance that it is full of great ideas and has three charming performers in the form of Yann Allsopp (Colin), Rebecca Kenny (Nigella) and Sophie Winter (Liz) but there is very little development of anything. We start with a MP led Question Time about the recent banning of dancing (what is dancing, poor the nightclubs etc etc), which works but there are too many ideas. A comment on the weird stance that Conservative MPs do; the ghost of Margaret Thatcher and satire on Strictly Come Dancing, Brexit, Black Lives Matter and immigration feature. It is quite a hyperactive 45 minutes.

A lot of that time is taken up with illegal movement and it does drag during these sections but it is humorous and I particularly enjoyed Tory Colin’s slow dance with Margaret Thatcher, who uses dance as a metaphor for society (You don’t need other people to dance with). If you see this as a work in progress it has potential but ideas need to be developed and my concern is that Allsopp’s writing doesn’t have confidence in his ideas; maybe the issue is the Dance metaphor or maybe we are living in a time where damning satire is hard to do because the world is a bit ridiculous right now.

If you love politics then I would recommend seeing this as it is fun to spot the references but as a comedy production it doesn’t quite hit the mark and often misses its cue.

End of Dance is on until 26 February