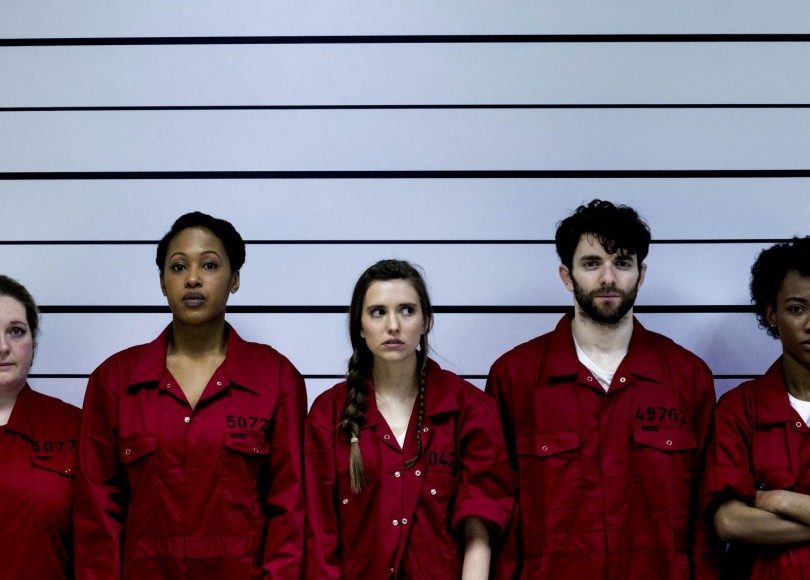 For limited run in May Ugly Duck, a company known primarily for the use of abandoned and disused spaces host ProxC Productions Disconnect, A play asking the audience to vote on the fate of 10 convicted criminals scheduled for jettison from ProxC – a spaceship carrying the remnants of humanity towards a new earth & a new start. I spoke to Michelle Shortland and KT Jemmett from ProxC Productions

Ugly Duck’s focus is on abandoned and disused buildings? Why did you choose this approach to presenting Performance and Exhibitions over having a regular home?

Michelle: Our show ‘Disconnect’ is about challenging the status quo, questioning the power that lies in the people and specifically the power of voting. As a result, it is wonderful that we are able to put this incarnation in such an unusual space, we really want the audience to feel as though they are part of the action on stage and a space like this lends itself to that feeling. Whereas a more traditional theatre has a very obvious distinction between the audience and the company.

KT: Ugly Duck renovate abandoned and disused buildings – they don’t feel unloved anymore once Ugly Duck has finished with them. The Loft where Disconnect will be staged is such a dynamic and interesting place, allowing us to use more dimensions than a regular theatre and also allowing us to bring the audience right into where the action is. Disconnect has been developed with a view to being adaptable to multiple venues – we want to make it accessible to everyone so Ugly Duck were the perfect choice.

Is the future of theatre moving away from traditional spaces or is it an issue very specific to London?

Michelle: Premiums on space in London is certainly a problem – as Michelle said we’re really lucky to have been selected for the Ugly Duck season – collaborating with them has meant that we’ve had use of their amazing spaces when the cost of rehearsal and performance spaces would otherwise have been prohibitive. However I think that even had that not been a consideration we would have aimed to produce Disconnect in a non-traditional space – all the transfer venues we’re approaching have performance spaces which are not laid out in the traditional stage/audience manner – the inclusion of the audience is really important for us, they’re as much a part of the story as the cast. In terms of the future of theatre in general I think there needs to be love for both forms – theatre should embrace spaces of all types!

I believe the future of theatre lies in any venue that will house it. Although I firmly believe that theatres are important community venues, they are not accessible to everyone and neither are they the right setting for every theatre piece. It’s wonderful to see theatre spring up all over London.

Theatre allows a quick response to news events, did Disconnect, your upcoming production, come purely because of Brexit or was it an idea you had been planning for a while?

Excellent question – and one we’ve been thinking a lot about. I’d been wanting to write something set in space for a while – it can be great for high concept low budget which is one of my key areas of interest. It started out as a life boat in space with a faulty distress beacon so people who were thrown together facing the rest of their lives living on this small ship – then that developed up into something closer to Disconnect with the idea that the audience were from the bigger ship (ProxC) and they had to vote on the fate of the convicts on the smaller ship. Then Brexit happened. That was the point that the vague ideas really coalesced into a structured story focusing on stay vs go – and the importance of the audience vote became clear. We applied to Ugly Duck just post-Brexit, so although the idea actually preceded it, Brexit suddenly made it more relevant than we could ever have expected. With Trump just a little bit later we couldn’t have been luckier with our timing – the one silver lining of the scary world we now live in. We’re really excited to be creating a story with something important to say about society, while still (hopefully) being funny, touching and entertaining.

Law and Order is quite an emotive subject; do you expect the audience to make up to typical liberal theatre audience or do you think it will attract those whose views may be more hardline?

We hope to attract a genuine cross section, because that would make the outcomes all the more interesting. We have been very careful not to lead the audience in one direction or another and this is not about us passing judgement on people it’s more that we want to reiterate how important it is to be heard.

While our hope is that we’ll attract a diverse audience we’ve tried really hard to keep the story as balanced as possible and avoid presenting the audience with a ‘morally correct’ option. Even if it is an audience made entirely of liberals I think it will still be a tough decision.
It’ll be really interesting to see what happens, and we’re hoping further down the line to gather basic data from our audiences (age bracket, gender, sexuality, religion, political leaning) and see if there’s any correlation in how certain demographics vote.

Disconnect, with its vote, sounds like quite an interactive show. Have you worked out how many possible endings there are?

What a question! Well formally there are only two endings; stay or go. However because of the way we are going to work it the ending will be improvised each night so really it could be different each and every time!

I’m really excited about this aspect – it’s been an amazing experience to create a script from improvisation sessions and the final scenes have always been the most emotive so I think it’ll be great to watch the actors channel the energy of that night into the ending the audience see. I also think it raises an important point about voting – we’re literally forcing the audience to watch the consequences of their vote which we can often be more removed from in the real world. Every vote we cast in our lifetime will have real world consequences for real people and I think it’s too easy to distance ourselves from that.

What’s next for Ugly Duck and ProxCProd ?

We believe that Disconnect has real potential, we would like to put it on for a longer run in a venue that welcomes slightly alternative theatre. We are also considering taking it to the fringe.

I hope ProxC Prod will be something that just keeps giving. The story is set on ProxC – a spaceship carrying humanity to a new earth. Disconnect is one story in this world but there are many more which I hope we’ll get to tell. Sci-fi is such an amazing tool to explore real world issues and I think there’ll be plenty of those in the coming