Miss Nightingale returns to London after 6 years and many UK tours. Matthew Bugg’s musical sees him play actor, musician, producer, director and composer/lyricist. Is it too many hats for one man to wear or does Mr Bugg manage to get the balance, just right?

In this production, everyone is actor-musician, a technique I last saw in Through the Mill (which is to return to the West End as Judy!), which makes sense in such a production where cabaret numbers are the focus and we the audience are watching the show, in all senses.  Miss Nightingale/Maggie, played by Tamar Broadbent is a nurse who is made into a wartime cabaret star by Sir Frank Worthington-Blythe (Nicholas Coutu-Langmead) who has a reputation to keep and scandal to avoid, which is hard when you are a homosexual when it is still illegal. He enters a secret and a risky relationship with George (Conor O’Kane), a Polish Jew who wants to bring the Weimar Republic he knew to Britain. What follows is a love triangle, blackmail and lots of bawdy songs. 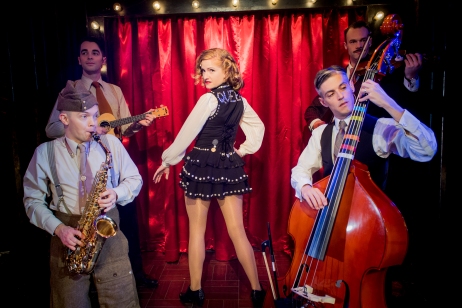 Perhaps too many songs? There are around 20 and towards the end, they start to sound the same (so many three-part harmonies between the three leads!) and the ballads from the characters interrupt the flow of the story. The live band are great but it struggles to find the balance of what musical theatre really is.  The songs work better in the cabaret setting and Broadbent, a comedian by trade, seems to relish the cheekiness of songs such as ‘Let Me Play on Your Pipe’ and ‘The Pussy Song’ but sadly it just doesn’t feel strong enough to justify its 2.5-hour running time.

What saves it is some great performances, I particularly enjoyed Conor O’Kane as George who brings some ‘Goodbye to Berlin/Cabaret’ vibes to ‘Meine Liebe Berlin’ and Nicholas Coutu-Langmead as the repressed Sir Frank whose ‘Mister Nightingale’ is a beautifully expressive song about his love for George but in terms of storyline there are so many questions; is nurse and woman of the world Maggie so naïve as to not realise George is gay? There is also a clumsy beginning to a great scene where Maggie introduces her brother Harry (Matthew Bugg) and Sir Frank, out of character, accuses him of being dead in an aggressive way. It is a real shame that there are these clumsy moments because it could become a campy, underground classic (it reminded me of The Stripper) instead at times outstays its welcome, with fewer songs and more confidence in the story it still has the potential to become a British musical classic, something missing in recent years.