I initially thought I wouldn’t write a review on Limehouse, Steve Waters take on the emergence of the SDP Gang of Four in an East London kitchen, so as this was seen a month after press night this is very much a comment on the production rather than a review.

I loved Water’s Temple, a story about St Paul’s Cathedral’s lock down as part of the Occupy London protests, it was one of the finest performances from Simon Russell Beale I have ever seen and I also love politics so Limehouse was going on my to see list, the addition of Roger Allam was a bonus.

Waters once again focuses on a real-life event, the emergence of the SDP after a disastrous Labour Party Special Conference in January 1981, where it was clear that those on the centre-left (right) were no longer welcome. Sound familiar? The biggest laughs come from the fact that nothing has changed. Labour once again has an elderly, left-wing leader with bad press and the unions/militants rule and Labour is still is divided about what it should do about Europe but Waters, as in Temple, looks as the emotional impact of the story rather than the facts. 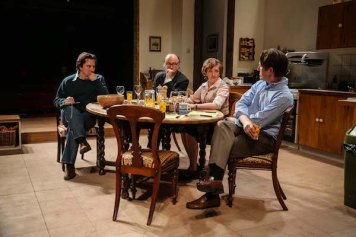 The Gang in question are Bill Rodgers (Paul Chahidi), Roy Jenkins (Allam), Shirley Williams (Debra Gillett) and David Owen (Tom Goodman-Hill), who after much persuading from his wife Debbie (Natalie Armin) decides to invite his colleagues to his Limehouse home. Debbie’s determination initially makes her seem a Lady Macbeth figure, buying Jenkins’ favourite wine, cooking up a Delia Smith (one of her literary clients) Macaroni Cheese and writing minutes for the meeting but it becomes clear she is very much an outsider, An American who isn’t in politics she is aware of the importance of Shirley if the project is to succeed and offer voters an alternative.

David Owen, who along with the surviving characters attended the press night, must be mortified but also rather pleased with Goodman’s swaggering portrayal of him. He is charmless, stubborn and I wondered if he was influenced by Owen’s Spitting Image puppet rather than the man himself. His intense hatred of the Liberals, a party he later had to work closely with, is both in keeping and at odds with a man who doesn’t seem to bleed Labour like others, who were all older than him and had been MPs longer. The real outsider in this David, not Debbie because she can relate whereas he struggles to truly belong anywhere.

The key performances are Gillet, Chahidi (with an incredible wig) and Allam as the rest of the gang. All have their doubts and as history shows all were right to, Waters portrays them with much less vanity than Owen but ultimately as people with as much to gain as to lose. Rodgers knows he will lose friends, Williams has worked hard to remain close to the party despite the electorate rejecting her in 1979 and Jenkins know his time has probably been and gone (He was European President) but he wants one last shot of the dice. It reveals the interesting dynamics between the three and the question that hovers over the story is “Should they have gone with Shirley as the leader?” She was a woman, she was a woman that talked like a normal person and understood where Labour’s base came from but when the leadership election came in 1982 Williams was nowhere to be seen and the much older, much more experienced Jenkins beat Owen.

This is a stunning production and understandably sold out but I will be very surprised if this isn’t transferred to a bigger venue because there is not only demand for this story but for a production of this calibre.