Dennis Potter is one of Britain’s most beloved and controversial playwrights, with Brimstone and Treacle being famous for having its television debut postponed by the BBC for nearly a decade, on the word of the then Director General, Alasdair Milne. Brave, then, is the theatre company that takes such a play on, and I went to see whether The Hope Theatre could do it justice.

The company have a small space above the Hope and Anchor pub in Islington, and made extremely effective use of it, seating the 55-strong audience around three sides of the room, leaving almost no space between them and the stage. This claustrophobic setup perfectly suits the lives of Mr and Mrs Bates, who have tried to cope with their daughter suffering a severe brain injury two years ago by caring for her themselves. Mrs Bates, naturally, has taken the bigger share of the caring role, and as a consequence has virtually stopped going outside. The relationship between the two, played with pitch-perfect frustration and sadness by Paul Clayton and Stephanie Beattie, is fraught and close to collapse.

Enter, then, the puzzling Martin Taylor, played with fiendish energy by the dazzling Fergus Leathem. After convincing her parents that he knew their daughter, Pattie, at college and had, in fact, proposed marriage, Martin talks himself into being trusted as her carer, which is where the real horror starts.

Olivia Beardsley is utterly convincing as poor Pattie Bates, seemingly locked inside her own injured brain and desperately trying to communicate to her father, who is ashamed of her, her fate, and his inability to cope, with his frustration expressing itself in his conviction that only the National Front can make things better. Her mother, worn down by the emotional and physical toll of caring for a profoundly disabled adult, spends the time not taken up by physical demands convincing herself that Pattie is making progress and finding solace in prayer, something Martin exploits in devilish fervour. 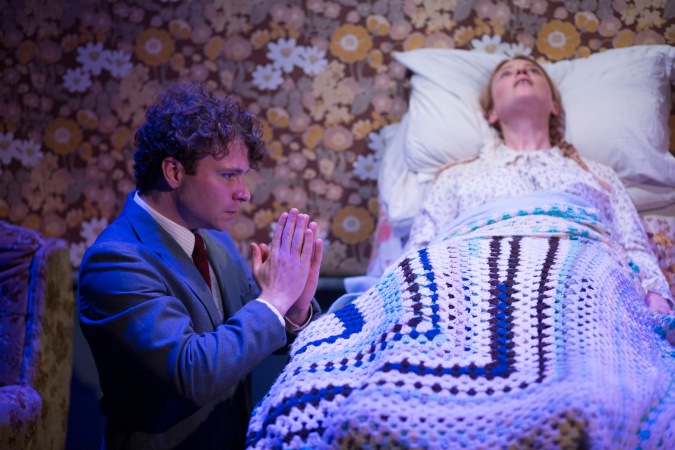 Martin’s efforts to ingratiate himself with the Bates extends to taking housework away from the exhausted Mrs Bates, encouraging her to leave him with Pattie. It’s a heartbreaking experience to see Mrs Bates beside herself with joy and guilt for simply leaving the house to get her hair done, with Martin manipulating her weaknesses on her return to distract her from Pattie’s disturbed bedclothes. He humours Mr Bates’ racism (the script is unchanged from the original, and the staging deliberately set in 1977), logically expanding the argument to an extent that revolts Mr Bates. You realise that he doesn’t really want mass repatriation; he just wants to go back to before Pattie had her accident, and to deal with his guilt over his actions that night.

The fevered atmosphere created by the cast thrills and disturbs, with Martin’s actions deeply shocking for being right in front of you, but with the black humour in the script still hitting the target, with both giggles and gasps in the audience over the gripping 90 minutes. This production, tightly directed by Matthew Parker, has lost none of the punch of the original play, and could not be more timely. It makes us think deeply about how human weaknesses don’t change, and how we’re open to manipulation just as much as our ancestors. It begs the question of whether good and evil exist, or, even if we’re incapable of committing unspeakable acts, whether we’re capable of letting them take place if they meet our needs. Mr and Mrs Bates, despairing and devastated, are in desperate need of a saviour, but is Martin actually the Devil? This reviewer urges you to go and see it to decide for yourself.

Brimstone and Treacle is on until 20 May