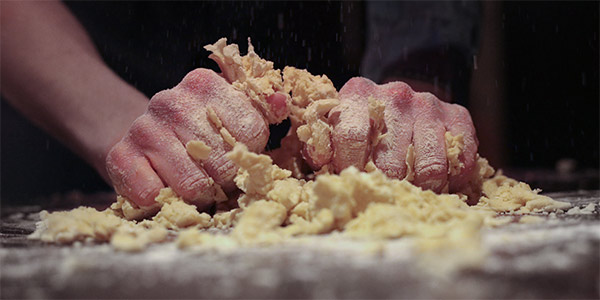 What is Food? Steve Rodger’s play, based in a Tasmanian backwater takeaway, receives its European premiere at the Finborough Theatre, and leaves me fascinated, but also confused.

Is Food a southern Gothic? There’s sufficient bitterness, sex, abuse, plotting and stifled secrets to see it as such. Its themes are plenty dark enough, and warrant warnings for disordered eating and abuse of a minor. Or is Food a nearly-heartwarming story of two sisters – Elma who stayed at home, Nancy who wandered into the wide world – reunited and overcoming past childhood tensions sharing a dream to open a successful restaurant?

To an extent, the tension of these two layers is a fruitful one. In particular, the third player this triangle, Hakan, suits the latter story, sometimes comically oblivious to the undercurrents of the sisters’ mutual pain. Perhaps part of the confusion is that Hakan, a positive soul enjoying his light-footed life, is indeed living that lighter play, while Elma and Nancy are in a much darker tale. Ambiguity and a refusal to spoon-feed the audience can be, should be, neat effects, that keep us attentive. The cast, particularly Emma Playfair as a practical, self-protectively tough Elma, do a great job of creating their atmosphere. The bitterness of the sisters’ history provides an intense, genuinely atmospheric start to the piece, which Hakan (Scot Karim) brightens perceptibly. The sex we see is affectionate and intimate, never awkward.

But for a short play, there are surprising longeurs. Hakan’s lengthy exposition on his past sexual history doesn’t seem to establish anything other than that he’s less damaged than the sisters – which isn’t saying much. Semi-dance movements are sometimes clunky, adding little to the text, though I confess that when the meaning of one ‘dance’ became clear, I gasped aloud. I wish I’d had more such moments of revelation. The character of Nancy (played by Lily Newbury-Freeman) is particularly blurred. Her backstory spells out grotesque abuse, but the script and publicity suggest a disturbing belief this equals Lolita-esque freedom. Worryingly, I never truly understood why she decided to return home, the event which catalyses the play’s action. Her damage is apparent; her motivations less so.

Confusion even extends to the eponymous theme. What is the meaning of food in Food? With one character’s backstory of disordered eating, it may be the enemy. And yet it’s also redemptive, cosy and enjoyable. Bread handed out to the audience at an emotional high point fills the small theatre with rosemary and yeasty goodness. Is it healthy or sinister that free carbs have such an effect on our mood?

It’s apparently the season for live frying of breakfast materials on the London stage, but unlike the clarity of The Deep Blue Sea’s redemptive fried egg, the bacon Elma fries at the curtain could be a distress signal or a return to comfort. Perhaps, like so much else about this play, it’s something you should read two ways, a recognition that life is complex. But you can have too many ambiguities. By the end, I was wishing the playwright had given us a few more signals to the way ahead.

Food is on at the Finborough Theatre until 15 July http://www.finboroughtheatre.co.uk/productions/2017/food.php Tickets from £14.