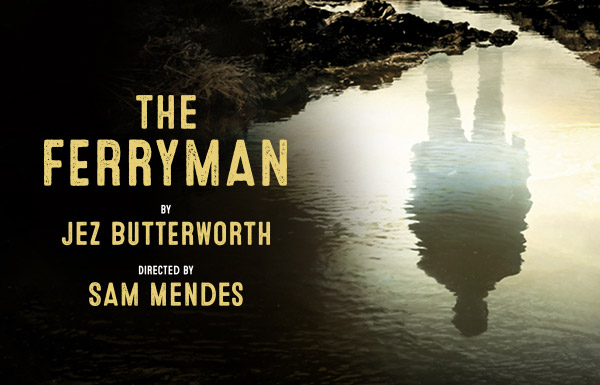 This production is a hot ticket, with a critically acclaimed writer in Jez Butterworth (Mojo, Jerusalem) and a household name theatre and award winning film director (trust me this is a rarity) Sam Mendes at the helm was it going to be anything else. Even before Paddy Considine was cast as Quinn, patriarch of a large Catholic family in Northern Ireland whose foundations are rocked by the discovery of his brother’s body who disappeared 10 years before.

I will be blunt; I am utterly baffled by the 5 * reviews and even more baffled when I read them http://www.whatsonstage.com/london-theatre/news/review-round-up-ferryman-jez-butterworth-royal-court_43506.html. There are clear flaws, acknowledged by some reviewers, yet it is treated as a ‘perfect’ production. This is an interesting work, made more poignant as Northern Ireland finds itself in the news as the DUP become a ‘partner’ in British Government but spectacular it is not.

The issue is that it wants to be this epic, with 20 characters it certainly achieves that but it feels like Butterworth wrote lots of different plays; a man in love with his sister-in-law, a generation who never recovered from the Easter Uprising, The Northern Irish relationship with the English and with each other, Young Catholics finding their place in a war zone, the hunger strike, a marriage breaking down and on it goes feeling more and more disjointed as the 3 hours (yes) go on. I saw many cuts I would have made, certain characters as well as certain storylines and relationships but I appreciate and understand why Butterworth needs so much. The story of the disappeared, which sadly gets lots amongst the kitchen sink drama, is a story rarely told, the psychological impact of your side turning against you and keeping quiet for an easier life as Caitlin, Quinn’s sister in law and wife of Seamus his disappeared brother played beautifully by Laura Donnelly, who I adore in Outlander. This is not only Donnelly’s play but Donnelly’s story as her own uncle disappeared.

There are some stunning support from Brid Brennan and Dearbhla Molloy as Quinn’s elderly, spinster aunts who present a look at early twentieth century Northern Ireland with their unrequited loves and militant tendencies. Molloy’s rage against Thatcher provides some understandable but uncomfortable viewing and Tom Glynn-Carney as Shane, one of Quinn’s nephew, who provides a glimpse into what drew young men to the Republican cause and why it created such loyalty to characters such as Stuart Graham’s Mr Muldoon. My only complaint is that Muldoon wasn’t played by Pierce Brosnan as a sexy Gerry Adams

Ultimately, I found the play disappointing. Considine’s Quinn doesn’t have the presence (and to be super harsh struggles with a consistent Northern Irish accent, especially in a cast so dominated by Irish/Northern Irish natives) or anything interesting about him. Even his relationship with the IRA is skirted over and his performance and character are completely upstaged by the younger cast members, including a well-behaved baby with additional live animals but on the whole the older children feel underwritten and Butterworth seemed so keen to show a large family he failed to question their role in an already fragmented play.

Staging wise it is a stunning use of the Gielgud space, not losing its intimacy yet feeling open to all that is going on. It isn’t a bad play at all but I can’t agree with 5*. It has its flaws, major ones, that make this a work that is difficult to warm to.

The Ferryman is booking until 7 October. Standing tickets are available from £12 and there is other availability throughout the run. The play opens on 29 June. https://www.delfontmackintosh.co.uk/tickets/the-ferryman/