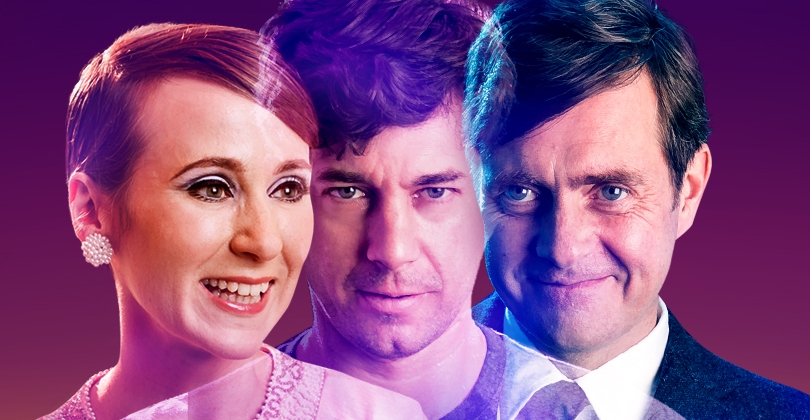 Kevin Elyot could quite possibly be a national treasure now, had he not died three years ago. His plays are instantly accessible, entertainingly written and have lots of lovely wordplay. ‎His biggest hit, My Night With Reg, enjoyed several runs and was just about to return to the West End at the time he died.
Twilight Song is the last play he ever wrote, so this is an unusual posthumous world premiere. The brilliant Park Theatre, just round the corner from Finsbury Park station, hosts this debut outing, and it’s a great intimate setting for an intimate story.
Starting in the present day it gets straight down to business with a playboy estate agent valuing an old North London property that has seen ‎much inside it’s walls. He’s doing the valuation for Barry, a middle aged man who has never quite found happiness and would clearly like more than just estate agency services from the visitor to his house. Lots of top quality innuendo follows, and a deal is reached, but not to sell the house.
Only when the play travels to 1961 and 1967 do we get some of the backstory about how Barry ended up trying to sell his mother’s house. A few extra characters enter the scene, and there’s some fine observations of the era, including a blistering attack on the plays of John Osborne.

The ‘love that dare not speak it’s name’ is a recurring theme of Elyot’s writing, and that’s the case here too. It’s not just the previously illegal love, though, it’s the true love that Barry’s Mum, Isabella, feels for a man she didn’t marry. In fact it’s sometimes a bit tricky to keep track of who loves who. There’s a lot of love around especially in the Summer of Love (nicely introduced here with a blast of The Beatles).
Eventually the three different time periods ‎link together and the story reaches a satisfying conclusion. It would have been good to see a bit more from ‘today’ and to see a lot more of Adam Garcia – one of the West End’s best leading men who collaborated with Elyot a few times during his lifetime. It’s a short play, but it’s a good footnote to Kevin Elyot’s collection and well worth going to see.