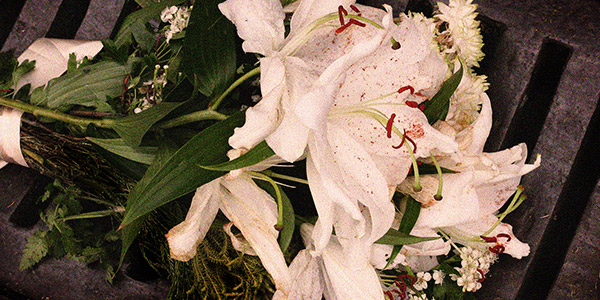 Walking into the tiny Finborough theatre for this revived Edwardian play is very much like stepping back in time. Music hall classics play as the audience assembles, and the pub’s own ornamental plasterwork is whitewashed back into prominence to create a genteel salon atmosphere, Tiffany lamp, piano, helplessly-pinned decorative butterflies and pious family photographs galore.

It’s about the last time that we feel comfortable, as Cicely Hamilton’s Just to Get Married returns for the London stage for the first time in 99 years. A lone photo of a suffragette demonstrations disrupts the display; out of place, yet critical to the story Hamilton chose to tell. The play is luxuriously cast, with ten characters, played by nine actors. This makes for too many to name in this review, but there’s a real lingering impact from the luxuriously-upholstered Lady Catherine (Nicola Blackman), unmarried, sparky Georgie (Philippa Quinn) and increasingly as the play develops Adam (Jonny McPherson), the inevitable single man possessed of good fortune who catalyses the whole play.

There are too many actors for this cramped space too, but blocking is well managed, and we only notice the crush in carefully staged instances when a character – usually Georgie – is made to feel superfluous, her place removed. It’s Georgie’s dilemma which preoccupies the playwright: the position of an unmarried 29-year-old woman. She is presented all too clearly: a poor relation, “trained for nothing” but wifehood in a marriage-centric society, with an unprepossessing but eligible suitor to contemplate.

Adam represents her last and only chance of marriage. The two paths available to Georgie (marriage or independent poverty) are neatly illustrated in the first scene – we know we’re in deft authorial hands here, even if it’s arguably *too* neat. It’s fair to warn, too, that the century-old slang creaks (“toad”, “old girl”… PG Wodehouse’s advice for aspiring fiancés to ‘grip firmly and waggle her about a bit’ while declaring, ‘“My mate!”’ isn’t far off what we see). But there’s real honesty too in the play’s theme, about the undervaluing and under-preparation of women for a role without male support, and male-derived cash.

We might think that Georgie is capable of far more, but she doesn’t recognise it. In showing us this, the three acts take on distinctly different tones. The first pitches us into that comfortable Edwardian salon, an excruciating Jane Austen world of naked hypocrisy: Georgie desperately enticing a proposal from the stereotypically-eligible Adam, having already made us well aware it’s purely a matter of practicality for her.

It’s a fascinating exercise in audience complicity, as we long for him to propose because we know how the narrative should run, even though Georgie’s lack of sincerity is laid out to us from the first lines. Act 2 impressively takes this forward, into honesty, anger and anguish. There’s a long scene here of great emotion, impressively sustained after the drawing-room froth which preceded it. Act 3 is the weakest, the well-made play showing its bones slightly too much, and at least in my part of the audience everyone guessing the denouement even before the relevant characters appeared on stage. But a positive outcome is welcome nonetheless – this isn’t a play about punishment, it’s about hypocrisy versus honesty, about what society enforces and how we might, just, escape from that. In that, its subject is very far from dated.

Just to Get Married is on at the Finborough Theatre until 19 August. Tickets from £16: http://www.finboroughtheatre.co.uk/productions/2017/just-to-get-married.php.