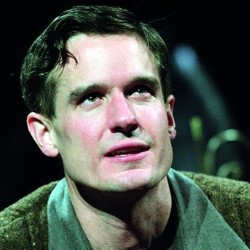 Totally about Heroes and the Futility of War

Not About Heroes is a play written by Stephen McDonald about the relationship between  Siegfried Sassoon and Wilfred Owen, the futility of war and the personal and artistic growth of Wilfred as a man and a poet. First performed in 1982, this production is by the Flying Bridge Theatre Company, starring Daniel Llewelyn Williams as Siegfried Sassoon and Iestyn Arwel as Wilfred Owen.

The awkwardness I felt at the start of the play was due to Wilfred Owen’s shyness, excellently portrayed by Arwel. Based on the letters and poetry of Siegfried Sassoon and Wilfred Owen, the audience is allowed an insight into the developing relationship between the two poets.  We witness Wilfred’s growth as a person and a poet. We also get to know how World War I shaped and motivated Seigfried Sassoon, and of course, Wilfred Owen, to write protest, anti-war poetry.

Siegfried appears arrogant, cynical and self- deprecating with a caustic wit. Siegfried is very tortured by his war experiences. In particular, he is haunted by the deaths and maiming of close friends and comrades, which in turn is responsible for his self- destructive and extreme risk-taking behavior during combat. His self-admitted death wish, resulted in acts of heroism, for which he was awarded various military medals.

Wilfred Owen, on the other hand, is self-conscious, unconfident and extremely self-critical. When Wilfred and Siegfried first meet, in 1917 at Craiglockhart, a hospital for officers suffering from shell shock, we discover that Wilfred is in awe of Siegfried, hero worshipping him for his poetry and valour. Wilfred thinks that he isn’t worthy and doesn’t have the right to write the poetry he wants to create, which is about the war. Wilfred believes he must earn the right to do so and can only do this by experiencing war, by knowing “what a bullet feels like when it hits you” and how it feels to believe you’re dying. Wilfred declares that  “I can’t protest until I’ve earned it… They sent me here as they thought I was a coward… I have to know for myself.”

We learn from Wilfred’s many letters to his mother and from Siegfried, that Wilfred believed that Siegfried’s poems would help his mother understand: the futility of war, that all the young people died filthy and terrified and it was all for lies.
Siegfried becomes Wilfred’s mentor during their convalescence at Craiglockhart, where most of the play is set. Siegfried’s first impression of Wilfred is that he is shy and ordinary. He soon realises Wilfrid’s potential to excel and surpass him and other contemporary poets. Seigfried reads Wilfred’s  poetry and advises him on redrafts. I liked Siegfried’s humour, which is sharp and nasty but witty. When Wilfred leaves Craiglockhart for the Western Front, he leaves a letter to Siegfried expressing his feelings and admiration saying, “I love you, you have fixed me…I am your proud friend.”
Wilfred visits Siegfried in hospital after he is shot in the head in a friendly fire incident; Siegfried was mistaken for a German. Siegfried is badly shaken, physically and mentally.  During the visit, Wilfred asks Siegfried’s advice about the preface for his new book, which is about the pity of war. I found the message in the preface very moving and timeless. Reading the preface a loud, Wilfred says he can’t provide consolation, all he can do to for the next generation is warn them.

Although I knew that Wilfred Owen died just before the end of the war, in fact, it was a week before the Armistice, his death in the play is still very upsetting.

For me, Not About Heroes is about the relationship between the two poets, the futility of war, the development of war poetry and the motivation of the two poets.  It brought home to me, the beauty of the poetry, as well as the ugliness and horror of war.  I learned that Siegfried’s poetry, at first, patriotically supported the war. He subsequently turned against the war, protesting against the horrors and futile losses of life, limbs, and minds experienced whilst serving in France. I enjoyed the poetry, I’m not really into poetry, but this play has sparked an interest. It has revived and informed my limited knowledge of Wilfred Owen and the other World War I poets.  This play makes me want to revisit Wilfred Owen’s poetry, pay it the attention it deserves and research the biographies of Siegfried Sassoon and Wilfred Owen.

Not About Heroes is on until 28 August at the Pleasance Dome, Edinburgh https://tickets.edfringe.com/whats-on/not-about-heroes