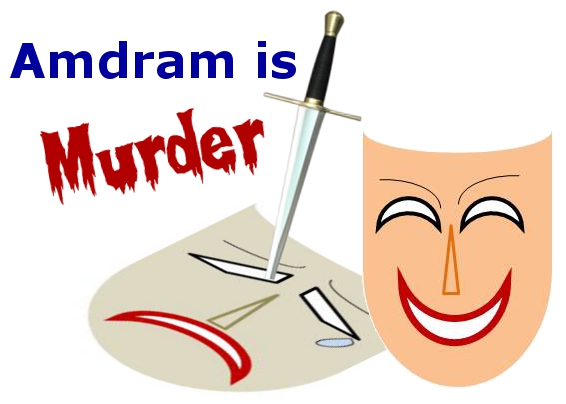 I am a big snob when it comes to Am Dram I know. All that criticism and more. There are numerous reasons why I am such a snob. Firstly, acting is damn hard, why on earth would you do it for no reward and secondly because as the audience member I am paying similar prices to professional fringe or West End bargains. A friend explained why; the production element tends to be professional, the director will be getting paid but actors usually aren’t.

I also think the am-dram I imagine is the am-dram of old. Freezing community centres where am-dram is there for something to do. I think there is a lot of merit in am-dram, for many young people this will be their first experience of acting outside the school play but I am based in Greater London and it mostly seems to be an opportunity for professionals who haven’t got any work right now.

Of course, that last sentence isn’t true. For many, across London and the country Am dram is genuinely about community spirit; both Simon and Zan got into through family with Simon’s daughters taking part in productions and he was asked to be a panto dame and Zan’s mum still active in Southampton. Growing up Zan was one of many children who involved because their parents were, it also attracted people who were new in town, also common to the rise of choirs.

As am dram societies considering more ambitious works alongside classics and musicals it also needs to consider its audiences. As Lauren and Shaun, both committee members of Am Dram Societies in South London state finding something that attracts families is hard, especially when other local am dram societies have either just done the same/similar production because the rights were temporary for amateur societies. The family-friendly element is about getting bums on seats; no theatre actively encourages lone wolves but societies need tickets sales to succeed. If one show sells well then, the society can take a risk with something more challenging, but less attractive to audiences.

My first experience of am-dram, The Nether by Jennifer Hailey, put on by SEDOS this week at the Bridewell Theatre. Even for a professional company, The Nether is ambitious; a sci-fi production about the darknet, avatars, paedophilia, desires and more it forces the audience to consider what is right and what is wrong. When I saw it in the West End its topic and lack of big names meant much of its success was through word of mouth and struggled to sell following its transfer from the Royal Court. It also featured a stunning set design from Es Devlin, moving seamlessly fro the real world to fantasy.

Do I want to discourage SEDOS et al from putting on ambitious and emotionally mature productions? Absolutely not but overhearing comments in the toilets many were baffled, many were uncomfortable and I am not sure it is a play for people who may not see a lot of theatre or may be there to see friends. For example, the epilogue is presented as two men standing in front of the stage. You can guess what happened; premature applause. The worst of the prematures.

Am Dram is more than a group of amateurs putting on shows for families and friends. It allows audiences to see shows not commonly found in professional settings, it builds confidence, it gives people a chance to perform in a relaxed setting. Janet, a performer, stated that it wasn’t about the show but the relationships built in rehearsal and Emily, an audience member, pointing out that it isn’t about the quality of acting but enthusiasm. How many of us have gone to professional productions where we’ve seen an actor who would clearly be somewhere else? Am Dram societies should be encouraged not only to stick at it but to take those risks, not only for their own interest but for the reputation of Amateur Dramatics as a whole.

The Nether is on until the 30th September and has other forthcoming productions at Bridewell Theatre.