Kathy Burke on The Retreat, diversity, an anthology raising money for Grenfell survivors and how she actively avoids Shakespeare

Kathy Burke is not a woman you will often see on the red carpet of a West End theatre press night. She doesn’t enjoy the photographs and expectations that come with it and she would much rather see her comp go those that are struggling to afford West End prices. This autumn Kathy finds herself directing in two very different venues with two very different plays; Sam Bain’s The Retreat at The Park Theatre and Oscar Wilde’s Lady Windermere’s Fan as part of Dominic Dromgoole’s Classic Spring season at The Vaudeville.

You are more likely to find Kathy in London’s fringe scene, though she adores the Young Vic speaking enthusiastically about Kwame Kwei-Armah’s confirmation as its new artistic director. Kathy has no plans to be an Artistic Director herself, she flirted with the idea before Ed Hall took over Hampstead. The plan was to job share with Samuel West. West was exhausted after running Sheffield but Burke felt the two would have complemented each other well, sharing similar ideas but having different strengths. West is good at public speaking whereas Burke is better at one to one conversations, for example.

I ask Kathy what draws her towards productions over others; is being close to her North London home crucial or is she willing to travel further afield? Kathy is wherever the engaging and good story is (and money, limiting her work in pub theatres). Her primary concern is doing her best for the play and writer, as well as supporting the actors.

A serious illness affected her ability to work outside of London but she is now in a position where she would consider working outside the M25, talking fondly of her work in Sheffield for Blue/Orange in 2005. She also prefers to do plays she has never seen before, as she doesn’t want another work influencing it. Her interpretation of the critically-acclaimed Blue/Orange made Joe Penhall remark that he loved it “but that wasn’t my play”

This naturally draws her to new plays but despite being a huge Wilde fan, mostly his novels, she had never read nor seen Lady Windermere’s Fan and really hoped she would like it. She did, though has chosen to abridge it, which she hopes Wilde would approve of the changes in the way Penhall did.

The hope was about her relationship with Dominic Dromgoole, former AD of Shakespeare’s Globe, who she has known for many years and counts him and former AD of the Hampstead Theatre Jenny Topper as her “theatre heroes” though she has never been afraid to turn him down in the past, refusing to work at Shakespeare’s Globe even though she loves what the venue does she is a director who likes sets (she is working closely with the same design team for Lady Windermere’s Fan and The Retreat) and lighting. It also doesn’t help that Burke is not some Simon Russell Beale-esque connoisseur of Shakespeare. It never featured in her training or in her career. In her youth, she liked the idea of playing Catherine in The Taming of the Shrew but as she got older the only part she was offered was the Nurse in Romeo and Juliet! She also had her share of Shakespeare as an audience member, if she went it was because a friend was acting or directing. She even spent five years just avoiding it (“It was fucking great”) despite friends’ presence.

Kathy and I spend most of the afternoon touching on diversity in all its forms. As an actor, she was often told she couldn’t/shouldn’t be a director. The advice she thankfully ignored as she had the support of mentors like Philip Davies and Robert Pugh. She has seen developments, particularly on television. When working on Gimme Gimme Gimme her and writer Jonathan Hervey had to ask if Jez could be “a posh black bloke” as they knew plenty they didn’t see the issue and ultimately neither did casting with the role going to Brian Bovell. Kathy is very clear that colour blind casting is key. The Retreat has three mixed raced actors (Yasmin Akram, Samuel Anderson, and Adam Deacon) after Sam Bain moved away from the white actors he had in mind when Kathy convinced him to go younger and to go diverse. Bain was delighted by the options it opened. In Lady Windermere’s Fan Kathy has cast old friend and colleague Jennifer Saunders and British-St Lucian Joseph Marcel as her brother. As Dawn French once advised “if you don’t ask you don’t get” thankfully Kathy is having to ask less and less. 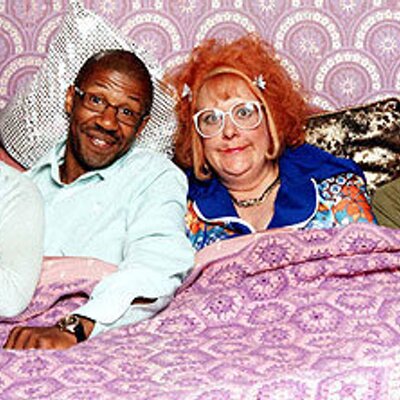 Alongside her theatre work, Kathy has kept herself busy as editor of the 24 Stories project, which is raising money for Grenfell Tower survivors as well as giving 12 previously unpublished authors the chance to be published alongside established writers. The project was formed by Rhona M, a woman who has suffered from PTSD and knows what the survivors face long-term, with assistance from Steve Thompson and Paul Jenkins.

The anthology has already met its target, with additional pledge money going to The Trauma Response Network and hopes to be published on the first anniversary of the fire on June 14, 2018. This is a project close to Kathy’s heart and considers the long-term impact after new homes have been found and after time has passed.

After a busy autumn, I ask Kathy what her plans are. France, by the sea where hopefully she can come back refreshed with her next project. This is still a woman who doesn’t like to sit still for too long.

There is still time to pledge support for 24 Stories on their Unbound Page https://unbound.com/books/grenfell

The Retreat is on at the Park Theatre from 2 Nov – 2 Dec https://www.parktheatre.co.uk/whats-on/the-retreat/about

One thought on “Kathy Burke Interview”