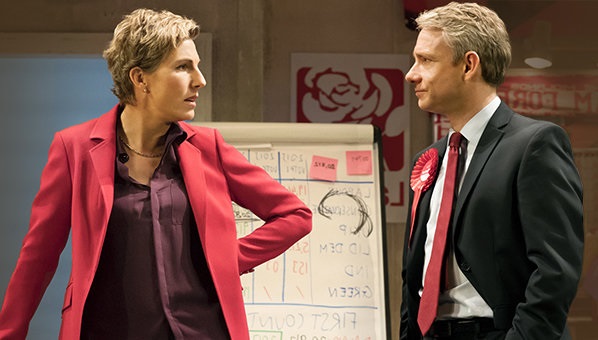 James Graham’s latest play covers twenty seven years of the life of a small town labour MP across two and a half hours, but it’s frustratingly a middling affair. As a satirical comedy it’s nowhere close to being as vicious as The Thick of It, or as wittily intelligent as Yes Minister, there’s vaguely funny jokes about Ken Clarke’s cholesterol levels, and why Labour chose the Red Rose as it’s party logo – “Because it looks pretty but is full of pricks” – but it’s rarely more amusing than that. Meanwhile the romantic comedy side of things is largely forgotten about until the second half, leaving for a highly uneven piece.

Set in Martin Freeman’s Labour MP’s office in Nottinghamshire, the first act begins on Election night in 2017 and then every 20 minutes or so leaps back to the previous election night until 1990, whilst the second half reverses the trend until we’re slowly brought back to the present day. A succession of minor set changes and questionable wigs are used to demonstrate the changes in time, and the structure creates some much needed tension, but it’s without doubt overlong. The first half largely sees Freeman and Greig bicker about their political beliefs, but there’s very little warmth between the characters and so it’s hard to buy in to any potential romance, and even more problematically the jokes aren’t particularly strong. Fortunately the second half is far better and it becomes a much more likeable and intriguing play, mainly as the bond between Freeman and Greig is explored in much more depth and the jokes start hitting home at a decent enough rate.

Freeman plays MP David Lyons as a mostly grumpy but genuine and honest individual, and is absolutely fine, but it’s a one note role which rarely gives him the chance to stretch his acting chops. However Tamsin Greig, who replaced Sarah Lancashire only two weeks before before the play opened due to illness, is absolutely superb in the far more meaty role, and she really gets to shine as her character copes with not only the struggles of working with a man whose beliefs rarely echo hers, but also the death of her husband and a failed second marriage. Despite the tragedy that surrounds the character Greig provides most of the humour, her comic timing impresses throughout, and without an actor of her calibre it would have been a much more disappointing work.

There are a couple of times where a character uses the c-word but without that it could easily be adapted for tv and shown in a mid-afternoon slot. It is a fairly enjoyable insight in to small scale politics and the day to day minutiae of being a MP, with a dash of romance thrown in (though less than you might imagine), but unfortunately it squanders it’s potential and whilst likeable is nothing notable. It’s perhaps worth seeing if you can get hold of the many £10 tickets which have been released for it, but definitely not at full price.