Lanie Robertson’s 2005 bio-monologue about Peggy Guggenheim could be just another ‘poor rich girl’ tale but in Guggenheim and in the performance from Judy Rosenblatt we see not only a tale of a woman who singlehandedly ensured modern art survived but also changed the way people looked at how art should be. 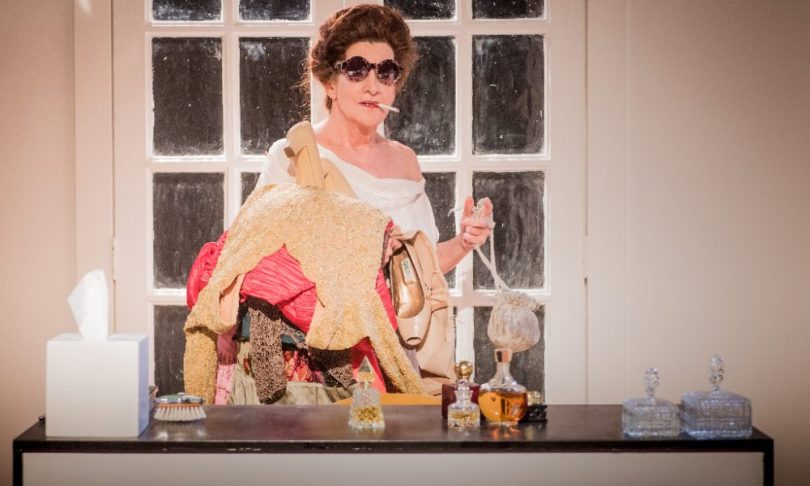 Guggenheim may have money and priceless works of art but she has no class; drunkenly goosing the director of Tate Britain Museum, flirting with men old enough to be her son, drinking excessively but watching her you do not judge, you just enjoy the ride. What a lot of rides Peggy had; two husbands, numerous lovers including Samuel Beckett, who encouraged her to spend her money on art. Guggenheim insists throughout she is one of the ‘poor’ Guggenheims as she is only a millionaire but it is obvious money hasn’t brought her happiness as she tells us about her horrible marriages, her lost loves and her difficult relationship with her distant children and her determination to keep her ‘children’ (her works of art) from her uncle’s museum.

There was a very good documentary about Peggy in 2015 called Art Addict. Anyone who saw this will have a background knowledge of Peggy will probably learn nothing new, as well as anyone coming fresh, might be slightly baffled. It is simply an old woman telling us about her incredible life but from another actress, it could be dull but at the risk of sounding like I am trying to get on the production’s marketing JUDY ROSENBLATT IS PEGGY GUGGENHEIM. It is a part she clearly loves and has played Peggy before. It is a raw yet classy performance; a great depiction of a woman of means whose gender, Jewish race and scandalous lifestyle made her and her works of art an outsider and who fought to get acceptance from society but also the men and artists (of all genders) through money and support. Her tale about escaping France after the occupation shows a deeply caring and charming but lonely woman, who gives because she feels she has nothing else to offer but her assets.

Woman Before a Glass is part of Jermyn Street Theatre’s Scandal Season until 3 February. Tickets available from £20