Hidden Theatre’s Island Song is the first professional adaptation of Sam Carner and Derek Gregor’s American musical. I would describe it as a millennial but heteronormative Rent set in New York as a group of five young people love, live and survive in the big city.

The five characters are; Caroline (Abby Restall) has moved from Pennsylvania to be with her boyfriend Josh but does he still want to be with her; Jordan (Drou Constantinou) who longs to enjoy life as a successful, hard-working singleton until she meets Will (Joshua Wills) a kind Architect who wants settle in the suburbs with children and a ferret, Cooper (Jack Anthony Smart) a struggling actor who in in the final days of his year long deadline to make a success of himself and Shoshana (Stephanie Lyse) unlucky in love and struggling just as much as the other newcomers to the city despite being a native.

This was not my first experience of Island Song’s fantastic songbook (which can be found here), which was performed by Polyphony Performance in 2017 as part of an ‘In Concert’ staging. (Interviews with Grace and Poppy)  and the musical is becoming a staple for emerging young artists. Hidden Theatre’s version expands the story, we see how they are connected and even though the songs explain the story well in songs such as Looking for a Little Room or TMI the story really gives the songs the context that is often needed. 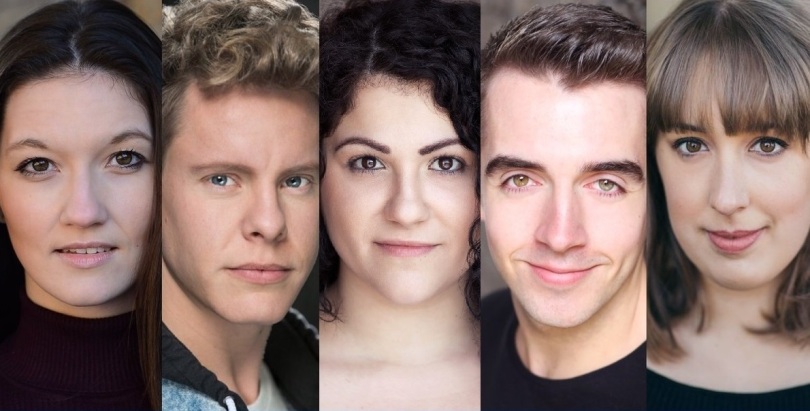 This is an incredibly strong cast as well, Lyse relishes the fantastic role of Shoshana, an over the top woman who is just looking for someone to love her and wild ways and has a wonderful voice, particularly in Sing, but Don’t Tell.

Christian Bullen’s direction of the scene so we are on an awkward date with her is expertly done but the studio venue means other decisions such as Will and Jordan in bed for a couple of numbers means that the audience cannot see what is going on but it is a strong production despite its limited staging with the live band (Ben David Papworth, Isis Dunthorne and Michael Dahl Rasmussen) proving solid accompaniment in this small space. Restall as Caroline manages to convey the disappointed as she desperately and optimistically clings on to the idea that life in a bigger city will work out fine with Constantinou and Wills providing great chemistry as the couple that love being together but who know they are on limited time. Smart as Cooper is the character many actors can relate to, struggling in New York and to make a career as he feels pressured to please a father who doesn’t care. I thought his monologue in the bar was a great piece of writing.

As great a musical as this is (with some strong ensemble songs) it is sadly lacking in a story to give these performers characters to bite into. Island Song has the potential to expand on its great story and currently it is a vehicle for the great songs. As an introduction to these emerging performers, it is the perfect showcase. I look forward to seeing them all in their future productions.

The production is on untl 16 April. Tickets can be purchased here https://www.thehiddentheatrecompany.com/islandsong