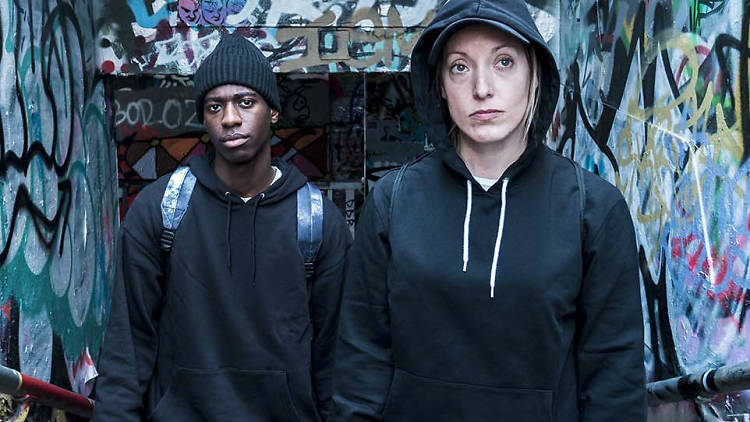 Set in my home turf Newham, it’s nice to see the area being portrayed with a bit of heart that doesn’t revolve around violent crime. Although, Shadow Kingdoms does centre around the act of criminal damage (to the officials anyway)- graffiti art to others. Berri George writes a tale of an unlikely friendship between the infamous and forever-angry Mute (Katie Warren), and wide-eyed and eager up-and-coming Nxstar (Jorden Myrie). Two interesting and fulfilling roles played by an ‘older’ (these days meaning 27+…) woman that isn’t just a mother/wife/girlfriend, and a young black man who is incredibly smart, funny and a bit of a lovable goofball, casting and writing go refreshingly against rehashed ‘type’.

The combination of set/lighting/graffiti art are striking; bold colours, and lines set various scenes of dark streets at night, tube tracks, and the day to day life of Mute and Nxstar. Unfortunately, however, performances didn’t fully utilise the design. Apart from a couple of moments of choreographed spray can action, the movement didn’t go far enough to either highlight the angular design or consciously go against it. At times the delivery of text felt so theatrical for an intimate space like the 503 that connection was lost between the performers, and movement was not theatrical enough. Energy dipped between each scene as props were shuffled about in the dark, or actors stepped behind the flats only to pop back out again on lights up into the next scene. Myrie’s emotional presence and carried me along, but  I craved movement elements to be integrated throughout, including transitions for an audience to see. Instead, it felt stop-start, with a lack of definition in purpose and mood between scenes. The second half of the play felt confused. Opening with a stylistically written monologue from Nxstar, felt out of place as it was a device not used before, nor again after. As the day-time lives of both characters are revealed, without giving the plot away, some of the events that followed lacked clarity. 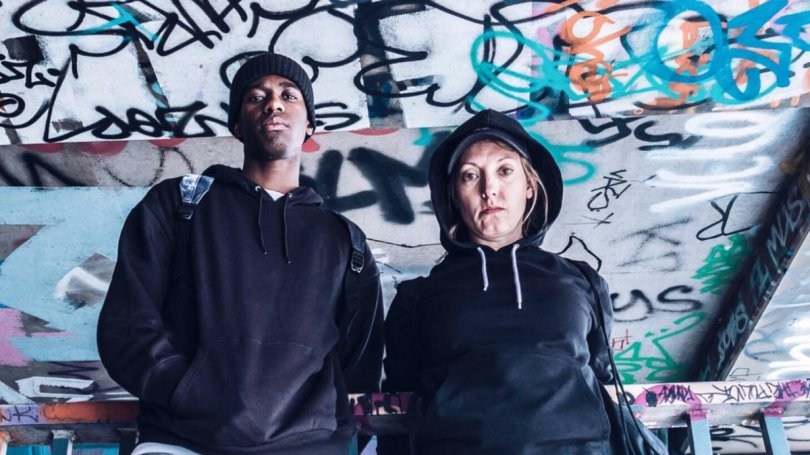 Newham is a poverty-stricken area, and although the gentrification from the Olympics has brought the borough out of the poorest boroughs in England officially, the gap between rich and poor because of this has widened. This play is about two people from different generations, different walks of life, but both with their own difficult situations to deal with. By night they escape their woes, and become powerful, making their mark on and through the city for all to see for the next 48 hours. The mark of those who no one notices otherwise. But do their dreams stop at covering train carriage?

Shadow Kingdoms is on until 16 June https://theatre503.com/whats-on/shadow-kingdoms/