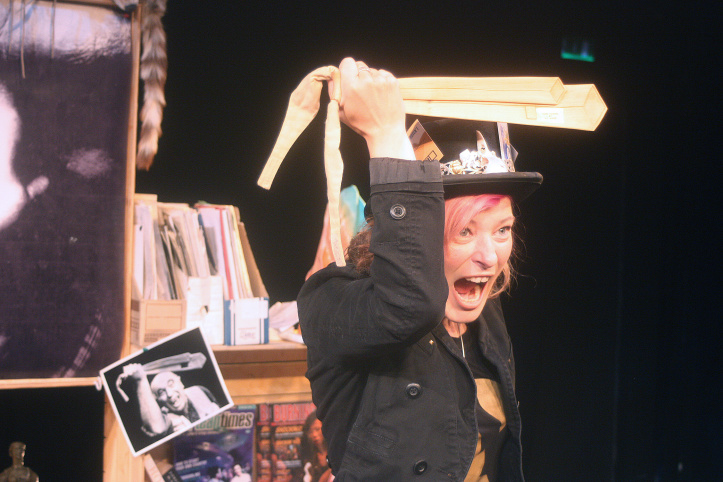 The problem with writing a review is parking your arse down on a chair and working out how to structure it. Your mind is firing in all directions. I liked this bit of the show, this bit made me laugh, this bit made me feel sad, I can’t believe how good that woman is as a performer, I can’t imagine what it must be like to live in her world. There comes a point where you have to decipher which bits of information in the press release it will be useful for you good people to know about.

On one level Pigspurt’s Daughter is a piece written by Daisy Campbell about her father, but this is only really a launch point. We zig-zag along with her from a self-discovery workshop in Paris, and on to an obsession with a missing brick. There is a minor injury derived from carting around detritus for the KLF in Liverpool, and an incident involving a very understanding council official and a fat suit.

What’s not to love?

On another level Pigspurt’s Daughter is a piece written by Daisy Campbell fuelled by a wounding comment made by a man accusing her of living up her father’s arse. I’ve heard Daisy rant at length about this comment before at a book launch a few years ago. It’s difficult to imagine why people say such hurtful things in a reasonable world populated by reasonable people, but such is the way of things. Maybe she can let the comment go. After all, neuroscience has proved we hold on to negative comments for longer than we do positive ones. We give these comments an illogical gravitas, given such comments are in reality less common than praise. There’s a lesson here for all of us. We might not think we suffer from rigid thinking, but Daisy’s off-grid thinking reminds us that we all do, a teeny bit.

There’s something wonderfully powerful and child-like about her that’s easy to celebrate. She shows how much people mean to her by giving them a tarot card to be the keeper of. She kills time on a hospital ward by reading people’s fortune via David Bowie lyrics written in tiny writing on an old cassette. It’s a fine mind she has and a giving soul. Her father’s spirit lives on and hopefully will in her children too. The theatre needs this kind of dynasty. As bollocks go, it’s a delightful and well structured load of bollocks.