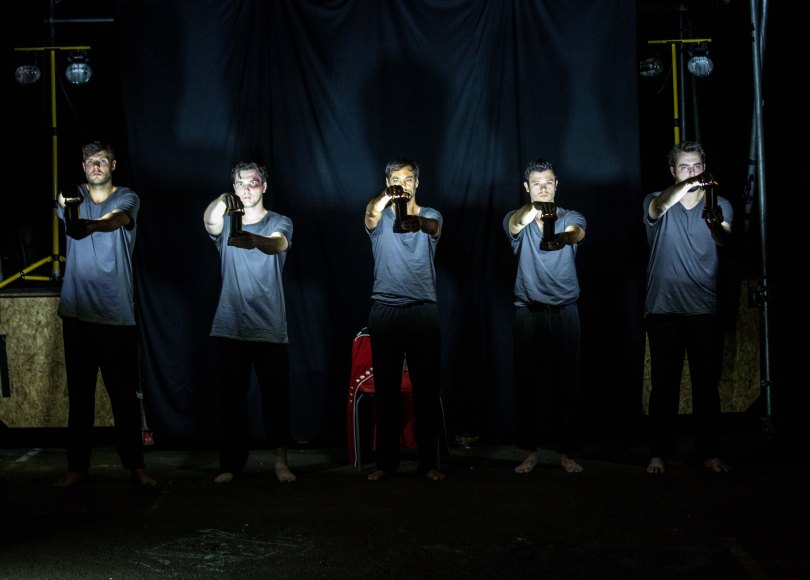 Reading Gaol is a fantastically evocative poem and this is a powerful piece of work built out of and around it. The play consists of readings of Reading Gaol, interspersed with monologues – written now but covering a longer timespan from Wilde’s time to now. Each is delivered by one of five actors, who each get their chance to shine.

Each story is different. Some of the men depicted are innocent and some are not. Some feel guilt for what they have done, some do not. All face the same dreadful, inhumane end.

This is a sparse production. A black room lined with (sadly very uncomfortable) chairs. The lighting design does well to build the cells, the story and the sense – even in this large room – of claustrophobia.

The play has a few sound issues. The venue is lovely, but the summer evening had brought a good few revellers to its yard, and they could too often be heard over some of the actors. When using a space as large and challenging at that, some of them did need to learn to project more. However, when I could hear them, all the actors inhabited their roles superbly, and Malcolm Jeffries was a particular standout for me. Part old lag, possibly ghost tied forever to the gaol, his anger, frustration, sorrow and even hope were beautifully and subtly rendered.

Overall, I found this production deeply affecting and moving. The combination of the youthful physicality of the actors, the stark blackness of the space – which stood well as a metaphor for their future in incarceration – and the occasional hopeful beam of light was well handled by director David Brady.

This is a deliberately hard-edged challenge to the classic, foppish Wilde we are used to seeing. No less a wit, here the sharper edges of his work are not aimed at the social mores of Victorian England, but the society that tortured and broke him simply for who he was and who he loved. There is anger, horror and sorrow there as well as a deep sense of the humanity of those who society has wronged and even those it has rightly punished.

This is a play that will make you think, even as it entertains. That’s always worth a trip down the Victoria Line for.