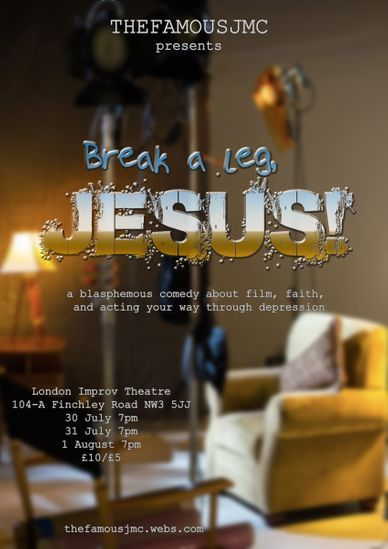 Billed as a “blasphemous comedy about film, faith and acting your way through depression”, the show is about a modern day actor, who goes by the English-pronounced name of Jesus. With his very Roman surname and a handful of biblically named friends, Myra and Joe, Jesus comes to grips with the relationship he doesn’t have with his inept agent, Baptiste. With a plot to save Baptiste’s agency by making an independent streaming video, he finds himself innocently navigating through a new romance with jazz singer, wannabe actress, Maggie. When Baptiste’s indiscretions get everyone into trouble, they band together to save the day.

While these characters are aptly named after bible archetypes, their personalities are relatable and true and the biblical jokes come at you as fast as you can keep up – ones you’d expect plus many more.

Owen Clark plays Jesus as an Every Man, wide-eyed and impressionable, resilient in the face of adversity. His performance really starts to take off when he and his cast-mates find moments to adlib around the script. His love interest, Maggie, played by Georgia Forde, is just the right touch of sexy and sweet. She convincingly plays a jazz singer, crooning “Can’t Help Lovin’ That Man” to the audience. Her character, who at first appears like a typical shallow pop star, unfolds into a stronger, more independent woman as the story develops. Aurelia Gage as Myra plays the devoted yet protective friend role brilliantly, switching between exasperated and supportive and back again through Jesus’ tribulations. Her multi-costumed dance montage has the audience in stitches. Raphael von Blumenthal’s portrayal of Joe, the anxious, servile sidekick to Myra, was effortlessly funny and often a surprise. He shows a really dynamic range for accents and idioms in his narrated montage. Baptiste, captured by Steven Jeram, is loveable and funny but annoyingly useless. His performance is punctuated with slapstick comedy as he manipulates Jesus like a puppet on a string with his swerving banter and quick-fire punch lines.

Break a Leg, Jesus! is a charming satire that touches on millennial issues in a hilarious way. The sheer idea of present-day Jesus being an actor grabs your attention. His relatable struggles as an artist tug at your heartstrings as you root for him and his team of unlikely compadres.  The script is full of zingers but leaves just enough room for the actors to add their own ad-libs. The fluidity of the story and the quick pace of the jokes have the audience on the edge of their seats. There is something for everyone. Romance, friendship, farce, a short film, a dance montage, a jazz break and even some (albeit blasphemous) religious references!

The production is on until 1 August https://camdenfringe.com/show.php?acts_id=2022