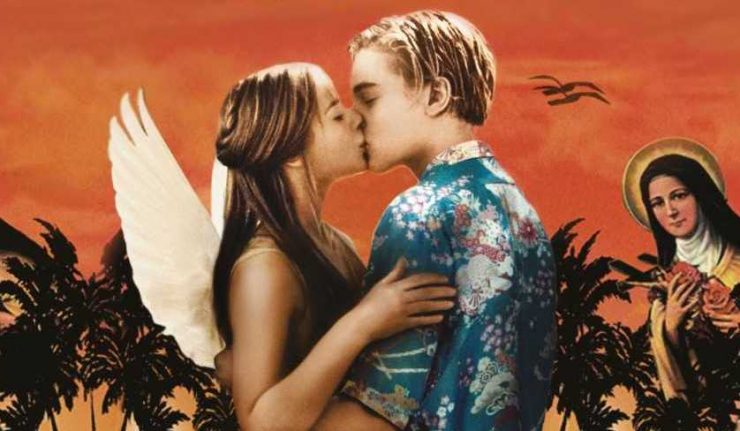 This weekend ‘Secret Cinema presents William Shakespeare’s Romeo+Juliet’ put on it’s final show and View From the Cheap Seats was lucky enough to be there. An undisclosed location in London was miraculously transformed into Verona Beach as depicted in Baz Lurhmann’s 1996 Shakespearean adaptation. This transformation was one of the most complete immersive experiences we have ever experienced. As is their modus operandi, Secret Cinema took over a huge London area and filled every inch of it with dressings and trappings that seemed to have been ripped straight out of the movie. Before the event, every attendee is given a character to embody and costume guidelines to adhere to, thus we the audience become the finishing touches on this living cinematic tableau.

Prior to the day, we were sent correspondence from Father Lawrence (you know, the priest who miraculously carries fake poison for Juliet) inviting us to a celebration of peace in Verona Beach. The houses of Montague and Capulet are to sign a new decree ushering in a hitherto unheard-of era of peace in the town and everyone is there to celebrate. Herein lies the magic of how Secret Cinema slowly immerses you into their world. They set their experience in the hours just before the story in the film begins. You arrive, take a look around, go on the Ferris wheel and have a few drinks. As you get used to your surroundings you’ll notice Mercucio stride straight passed you and you’ll barely double-take. After all, this is Verona and he does live here. Similarly, when a slight young girl in a white dress and angel wings flitted passed me my immediate thought was simply “oh Juliette must be going to the Capulet Mansion over there.”

It’s shocking how natural it felt to be part of the film’s world. This is really a testament to how Secret Cinema left almost nothing to the imagination during the whole evening. As an attendee, you have two choices. Stand back and take in the sights until the film starts or get stuck in. If you don’t feel comfortable role-playing you’ll have a great time simply looking around the sets and set pieces and then watching the movie. If however, like me, you enjoy getting into character and play-acting then the evening had so much to offer that I feel certain that I didn’t experience even the half of it. My pre-film experience consisted of a flattering conversation with Fair Rosaline, earning the ire of Father Lawrence, making peace with members of the rival household, scoring an invite to the Capulet Masquerade Ball and meeting a drag queen named The Duchess to name but a few things. We lived in Secret Cinema’s world for three hours before the film played and I truly felt like one single member of Verona being swept along a whole city of activity.

When it was time for the film to be shown, the peace treaty had been torn to shreds and the Montagues and Capulets were at each other’s throats. The disused theatre at Sycamore Grove was the screen onto which the film was projected. We sat on the ground on blankets and watched the film as the actors we’d been interacting with all evening recreated every pivotal moment in perfect unison with the movie. The casting of these players was 10 out of 10. Each actor had the look and feel of their characters nailed down to the finest detail. Having spent the whole evening being immersed into the film’s world it was then no surprise that towards the end of the story certain audience members couldn’t resist shouting at the top of their lungs “don’t do it, she’s not really dead!”

Alas, the tragedy of Romeo and Juliette unfolded as it always has and as the star-crossed lovers took their lives there were many a tear shed among us Verona townsfolk. ’Secret Cinema presents William Shakespeare’s Romeo+Juliet’ was a roaring success. So full of highlights that we can’t wait to see what is next!