I’m the last person on earth to utilise a football metaphor, but the recent Pinter at the Pinter press day (showcasing the first two of six productions of the prolific playwright’s one act plays) is very much a game of two halves. To the point it’s almost hard to accept they are the work of the same immense brain. It’s an extraordinary and unexpected undertaking, dedicating one of London’s major theatres to the mainly slightly more obscure work of just one playwright for so long. It’s encouraging to see something with less than obvious commercial appeal in the West End, but slightly depressing to see one of the best theatrical cities in the world still so wedded in this kind of dead white male fetishism. Yes, Pinter was a genius. Shakespeare deserves to have theatres to his name. Where are the retrospectives of the work of Caryl Churchill, Timberlake Wertenbaker, Sarah Kane, or hell Aphra Behn?
But enough with the feminist ranting for now or we’ll be here all day, and on with the review. So roughly: Pinter 1 torture; Pinter 2 sexual hi-jinks. 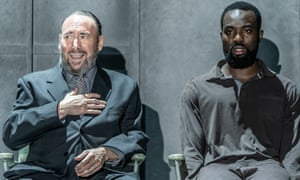 Pinter 1 opens with a series of short plays and monologues, not interlinked, but all giving a sense of some kind of dystopian dictatorial democracy (an intentional contradiction in terms). The always watchable Jonjo O’Neill opens the show in a shower of patriotic confetti with the monologue Press Conference, addressing the audience as the most charismatic of politicians, expounding on his hard work to keep us all safe. One the day an alleged sexual predator was confirmed for the United States Supreme Court the idea of a twinkly-eyed politician casually, calmly detailing the exact execution methods used on the children of dissidents suddenly doesn’t feel all that far removed from reality. Dystopian fiction used to be based on the fear our governments are lying to us. Now we’re afraid that they’re not.
The following pieces run from overt violence (two torturers debate language in front of a trembling naked man) to horrendous pathos (a prisoner begs his visiting mother not to speak in their banned native tongue) to the brutal sexual politics of war (a woman trying to find her vanished husband barters gropes and sexual favours with guards more concerned with whether the attack hounds followed correct procedure before maiming bureaucratic victims). It’s powerful but deeply unpleasant to watch. Although Paapa Essiedu pulls off an impressive feat by moving from violent thug to terrified prisoner so quickly between pieces, I struggled to focus on Antony Sher’s ponderous and mild interrogator-torturer in the final lenghtier One for the Road. I’m sorry, but I was simply all raped out by that point.
A few moments provide light(er) relief: Maggie Steed and Kate O’Flynn play across gender as Etonian toffs discussing what could be their golf scores or Ascot wins, but which turn out to be body counts. The Pres and an Officer is the most obvious, written explicitly as a dialogue between an extremely stupid, irrational, war-mongering US President and his chief of staff. Cursory googling tells me it was written about George Bush but it’s almost impossible to see “extremely stupid, irrational, war-mongering US President” and not imagine Donald Trump. But I can’t be the only one who suffers from theatrical Trump fatigue every time an actor appears on stage in a bad blond wig and a lot of fake tans. It works within the context of a broad Spitting Image-esque short satire, and God knows O’Neill twerking [edit: thank you, Mr O’Neill, for clarifying that he was in fact “slut dropping”] on Trump is worth the price of admission, but no one could call it subtle. Overall the shifts from comedy played so broadly for laughs to harrowing torture and sexual violence in the first half creates disconcerting tonal shifts, but that’s probably the point.

The longer Ashes to Ashes which takes up the second half showcases Lia Williams as a Holocaust obsessive to whom nothing bad has ever happened. A masterclass in subtlety, it felt rather disjointed and depressing sandwiched between the grotesque drama of the first half and the sparky comedy of the evening.
Pinter 2 combines two longer pieces, the Lover and the Collection.
The fantastically designed and staged the Lover sees a young married couple quickstepping around each other in their quotidian rituals. It’s like a dance; the pair changing shoes and re-filling cocktails in a precisely choreographed, pink-drenched, highly stylised examination of male and female life. But then the cracks start to show… The Lover, famously, asks more questions that it answers. Are the pair cheating? Are they to be taken literally? Are they simply engaged in an elaborate role play? Are they swingers, erotic adventurers, or repressed? Are they unhappy? London theatre has recently seen a bit of a trend in ‘deconstructive 50s femininity and feminism’ with both Laura Wade’s recent Darling, I’m Home, and Lilly Driscoll’s Only You exposing the stifling claustrophobia of wifedom in pearls and pretty frocks. Oh, but such beautiful frocks. And such a beautiful production, fragile as a glass animal, or the cocktail glasses shot back and forth across the tablecloth. But where’s the substance? Hayley Squires does doe-eyed Stepford Wife to perfection, her precise movements heightening the vicious matter of factness with which she shares the daily visits from her lover (who may be her husband) with her husband, who in exchange discusses the preferred fatness of his common or garden whore (who may be his wife). But politely. The piece, the only one in the entire day featuring women — well, one woman — as more than one-dimensional characters or abuse objects, is a beautiful and fascinating dance to watch, but the lack of emotional depth and clarity is ultimately frustrating.

By contrast, the final one-act play of the day, the Collection, is a sheer delight with a fat psychological payoff. A sinister homoerotic comedy draped in the plushiests of velvets (on a set that looks like Hammer Horror and the entire concept of the Seventies had a baby), complete with scene-stealing live fluffy cat. Russell Tovey plays a blinder here with a very smart acting choice: he doesn’t act like he’s in a Pinter play. Or rather, he acts like his character doesn’t know he’s in a Pinter play, casually tossing off baffled “U Wot M8s?” in the face of mysterious phone calls and enigmatic strangers. It’s a wonderful piece of contemporary naturalistic acting, a delicious counterpoint to Pinter’s forensically sharp and anatomised language, every exchange steeped in menacing subtext, and somehow the very funny, filthy moments don’t feel disjointed. Then the gloves and the wig come off and things get nasty and David Suchet discards his veneer of delicate fussiness and the whole array of sex, sexuality, gender, and class division is exposed underneath the secrets and the fantasies and the double-speak, and as one the audience realise just how good Pinter can be.
So roll on Pinters 3 through 6, and then, please, Caryl at the Caryl
The Pinter at Pinter season continues until Febuary 2019
https://www.pinteratthepinter.com/

One thought on “Pinter 1 and 2, Harold Pinter Theatre”