The first time I ever took a flight across the Atlantic was on a now-defunct airline. Not one of the famous, glamorous ones like Pan Am or TWA, but one I’d hardly heard of before or since called American Transair. So old and tired were their planes that they couldn’t make the flight from Manchester to New York in one go. Although I didn’t know it at the time of booking, they had to land as soon as they reached North America to top up on fuel. The airport they landed in was Gander, almost the very first bit of terra firma in Newfoundland…
I can remember Gander airport quite well, as we all disembarked while the tank was refilled. It was surprisingly large with a grand arrivals hall. I think there was some sort of big mural on the walls. The friendly Canadian immigration people gave the youngsters (that included me, for the avoidance of doubt) a stamp in our passports. Then it was time to fly on, and most people on board would, perhaps, never have thought of Gander again.
A decade after my brief visit, Gander suddenly had thousands of more visitors all landing on the same infamous day – 11 September 2001. When American airspace was closed, planes had a choice. Either turn back to Europe or land at the first available airport in North America. And it was little Gander where they landed. Over 7000 people in one day.
In the global crisis that followed 9/11, a small town in Canada was not a big news story. While the eyes of the world were on New York, Washington DC, Pennsylvania and, later, Afghanistan, the people of Gander behaved with the same friendliness that those immigration officers had shown to me all those years before. They took them into their homes, offered them clothes, food, beds, and showers. With airspace closed for several days friendships formed as the town, and, indeed, people from miles around in Newfoundland, all did what they could to help.
The idea of an uplifting musical about 9/11 might seem odd, but the story of Gander in those September days deserves to be told. When Irene Sankoff and David Hein had that idea they might have thought this would be a tough sell. They themselves said they thought it might only end up being performed in Canadian schools by kids who were forced to do it. But, it turned out, it was a great idea. That day impacted all of us, and the idea of finding warm human stories, set to music and song, is what led to Come From Away.
A Broadway hit for the last two years, performing eight times a week in a theatre only a few miles from the World Trade Centre, Come From Away has played a small part in helping us all to try to understand that day better. The songs are every bit as uplifting as you’d expect, and there are some strong hints of Ireland in some of the tunes. It’s no accident that the European premiere is in Dublin in December before moving to London in January 2019.
On 10 October 2018, the UK and Ireland cast got together for their first ever public performance in the wonderful surroundings of Canada House, London. They did three numbers from the show, and, for a cast that had only met days before, sang them beautifully. Perhaps the best-known cast member is Rachel Tucker, but all of them looked excited to be part of such a good show, one that could be set for a long West End run. 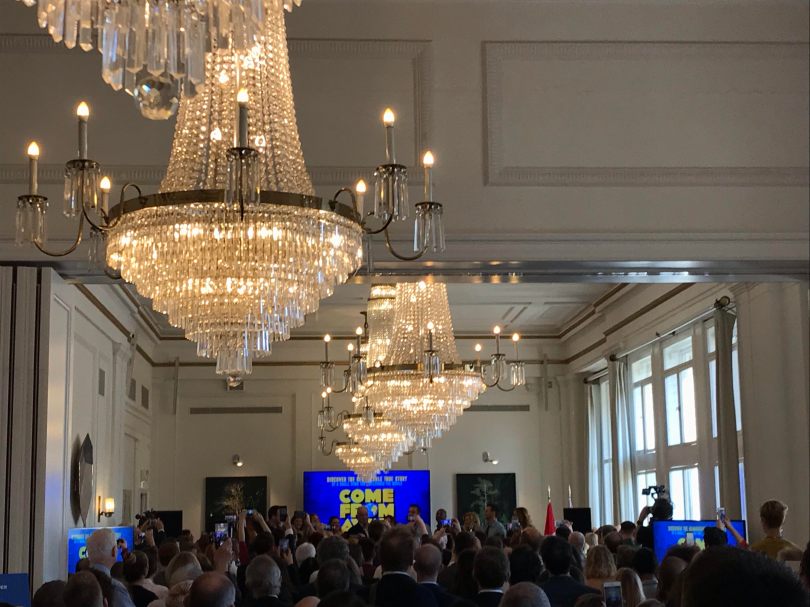 In the interests of full disclosure, attendees at the Canada House launch were bribed with a breakfast of maple syrup and pancakes, but they didn’t impact my verdict. Having seen the show on Broadway, I know what a lovely musical it is and I’ll be going back to see it in London next year.
Come From Away opens at the Phoenix Theatre on 30 January 2019. Tickets on sale now…