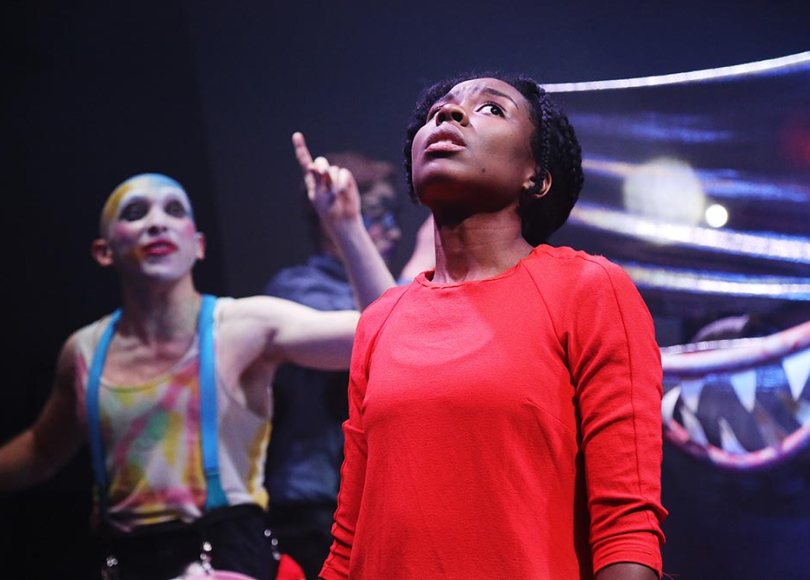 It is appropriate that Park Theatre are staging Jacky Ivimy’s Dialektikon at this time of year. Theatres are full of pantomimes, humorous re-workings of classic fairy tales, so why not a left-leaning and rather more timely one?

Doing the introducing is Ayida Wado (Sabina Cameron), named after the Vodou figure Ayida-Weddo (a rainbow serpent, symbol of fertility and Vodou equivalent of the Virgin Mary), and, in the opposite corner, trying to lure Miranda away from Ayida and her radical friends is The Servant (Benjamin Victor), an evil sprite and version of Moloch, a Canaanite god often used figuratively in literature (including Ginsberg’s ‘Howl’) as a person or thing demanding a costly sacrifice.

The Servant’s suggested sacrifice, we learn quickly, is our planet, our lives and our dignity, leading to a whistle-stop tour through what we now accept as structural violence (towards the environment, people of colour, women, the mentally ill…) but back in the late 60s was still considered radical thinking, and indeed was the subject of a 15-day conference at the Roundhouse called ‘Dialectics of Liberation Congress’, which Ginsberg, Marcuse, Bateson, Laing and Carmichael participated in. Much of the dialogue uttered by the five sages comes from their speeches at the ‘Dialectics…’ conference, and almost of all of it concerns issues we still haven’t faced up to properly – poverty, environmental destruction, sexism, racism and mental illness – and it is Ayida who challenges Miranda (our hope for the future) to find a way through it all.

Taunting them throughout, and endlessly trying to lure away Miranda, The Servant utters banalities and falsehoods familiar to us all: people are always going to die of poverty so why bother trying to fix it? Immigrants are to blame for all your troubles. Global warming is a myth, a giant scam invented by scientists to get research grants. The mentally ill are useless and should just be drugged. Etc. etc. Will The Servant’s arguments win out?

While it’s a bit ‘splainy and preachy at times, Dialektikon whips along at a fast pace, features some wonderful performances (Victor’s turn as the vile Servant is particularly good) and is enlivened by music from Stanley Ohios and Kate Luxmoore, and some clever puppetry (by Jenny Dee). The ending may be a little sentimental, but it’s hopeful, and at this exact moment in history, hope for the future is something we desperately need.