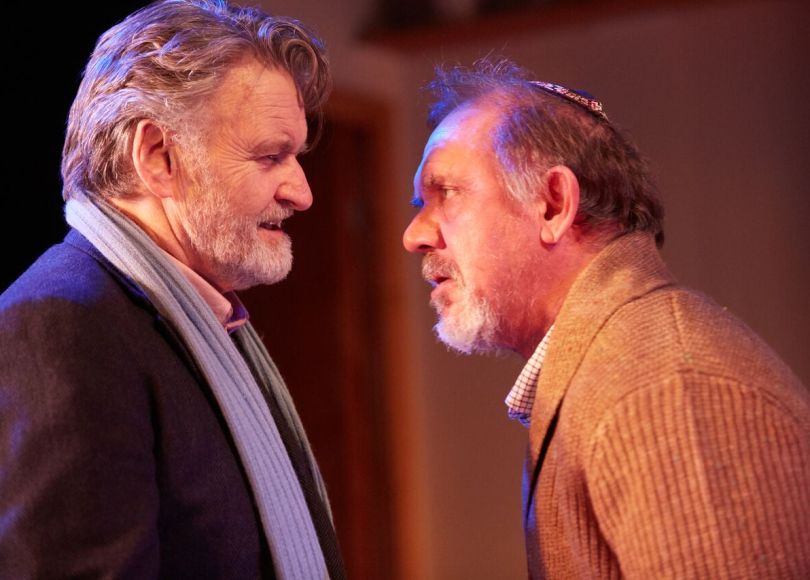 One cold and wintry day in Denmark in 2001 Abraham (David Bamber) and his wife Sara (Julia Swift) are awaiting the arrival of her ex-husband Lars (Neil McCaul) and his daughter Ava (Dorothea Myer-Bennett) as Lars wishes to interview Abraham for a book he’s writing. Both men knew each other as boys when the Nazis invaded Denmark, and Lars’ father Henrik was instrumental in saving Abraham’s family and 7,000 other Danish Jews in 1943 by helping them get to Sweden.

Such a set up my not sound like the kind of thing that a comedy drama would be based around but writer Alexander Bodin Saphir, whose grandparents were amongst those who were helped by the resistance to flee the country, handles it perfectly. At first it seems like a slightly frothy comedy of manners as it examines the quietly strained marriage between Abraham and Sara, which is shaken up by Lars’s arrival, but it then becomes much more than this as the book Lars is writing suggests that some of the Nazis themselves may have helped the Jewish population of Denmark escape.

Abraham’s whole identity revolves around this act of heroism by Henrik and others, he believes that the rescue is proof of God’s existence and that it was a miracle that so many were saved, and thus Lars’s suggestion deeply affects him. Early on in the play a discussion of a painting of the Danish king wearing a golden star provokes a debate about the nature of propaganda, of the need to differentiate between fact and fiction no matter what harm it could cause, and the nature of truth in general, and it is these themes that the play continues to revolve around. It’s not only in the consideration of what actually happened back in 1943 either but also with the characters personal lives, as it is revealed early on that Abe is not the father of his son Henrik but Lars is, while Lars has to come to terms with the fact that his daughter is gay.

Saphir also partially use this historical event as an allegory for the state of the world today as at one point they discuss how Muslims are essentially akin to the Danish Jews, and how if a far right party was to rise to power today and banish them, or worse, there would be no one prepared to help fight their cause. The drama between the characters and the choices they make is undoubtedly affecting and thought provoking but if there’s one message that the audience should take away from this it’s that history must not ever be allowed to repeat itself. The play also suggests that sometimes the truth doesn’t always matter, at least if it is emotionally damaging to an individual, and that not every mystery needs to be solved. That’s obviously dependent on the situation in question, but it’s something that Saphir considers in a compelling way.

What could have been a dry, all too didactic piece works superbly because of the carefully constructed humour found within the script and the performances from all are superb, but special mention should go to Bamber and Myer-Bennett who provide the more emotional elements of the play, though that’s not to say Swift and McCaul are less than impressive. The themes and ideas it centres around are explored in a fascinating manner and it’s one of the best pieces of theatre I’ve seen in years, I’d urge all to see it, whether you have an interest in the historical elements or not.