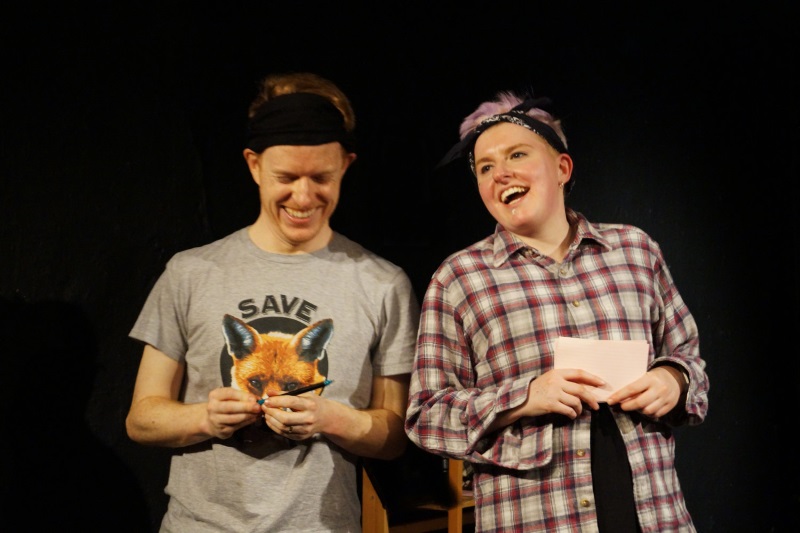 The first time I saw Degenerate Fox perform The Dirty Thirty was back in November 2017 and I was greatly impressed, commenting in my review “Degenerate Fox have created something rather special here…My only complaint is that it isn’t called The Dirty Sixty and double the length”. But due to the ever changing format of the production, where they perform thirty plays within sixty minutes but ditch a number of plays after each performance, tonight’s show was completely different and unfortunately it was a lesser work.

This was partially due to the differences in the line up, in the previous production seven took to the stage but this time around there were only four – Laura Killeen, Graham Self, Jack Wakely and Elena Larios – and both Desiree Burch, now a well known stand up comedian who’s appeared on QI, Mock The Week and Richard Osman’s House Of Games, and Daniel Collard, whose tribute to his grandmother was one of the highlights of the previous show, were greatly missed. But also something of an issue was the quality of the plays, last time around all entertained yet tonight was a slightly mixed bag.

On the positive side of things there was a lot to enjoy in many of the short plays. A two minute musical was an enormous amount of fun, Laura Killeen’s monologue about those she knew when she worked at a flower shop as a teenager was affecting stuff, Graham Self’s reading of 48 Ways To Get Sent To A Chinese Concentration Camp was disturbing and worrying material, while 15 Years saw the group discuss their lives and eventful moments over the past decade and a half while comparing it to the experiences of an unfairly imprisoned woman, which was quietly devastating. Also effective was Rebel! Rebel! which saw Jack Wakely speak candidly about issues concerning being trans, The Redheaded Stranger allowed Graham Self to discuss his own experiences as a redhead, and how others have been cruelly treated, #ElaNeo highlighted the shockingly depressing words and actions of the new Brazilian President, Talking To Three On The Phone: The Opera was a delightful mockery of just how awful certain customer service departments can be, and several other of the plays were also fascinating and / or fun.

But on the downside some of the new plays were a tad poor. When Life Gives You… saw Self and Larious discuss citrus fruit while Killeen and Wakely threw fruits around the stage and was largely pointless, the three part 8 Steps To Making A Friend was dull and a little patronising, March 29th had the group wear masks of Theresa May, Boris Johnson, Nigel Farage and David Cameron but rather than do anything harshly satirical they just did a silly dance which went on too long, Foxes Gekkering was just pointless and Uncomfortable Questions Time had all four quizzed by an audience member but they provided answers that weren’t interesting at all.

It’s a real shame as the concept is a great one, all four performers are clearly very talented, and as the previous production proved it can be a fantastic night out which will make you laugh, give you a new perspective on events, and shake your head in dismay at the sorry state of the world. Over half of the plays tonight fell in to that category too, but they need to up their quality control and ditch some of the skits which were either insignificant or bland if it’s to be a show I could wholeheartedly recommend again.

You can find information about future performances of The Dirty Thirty here: https://degeneratefox.co.uk/