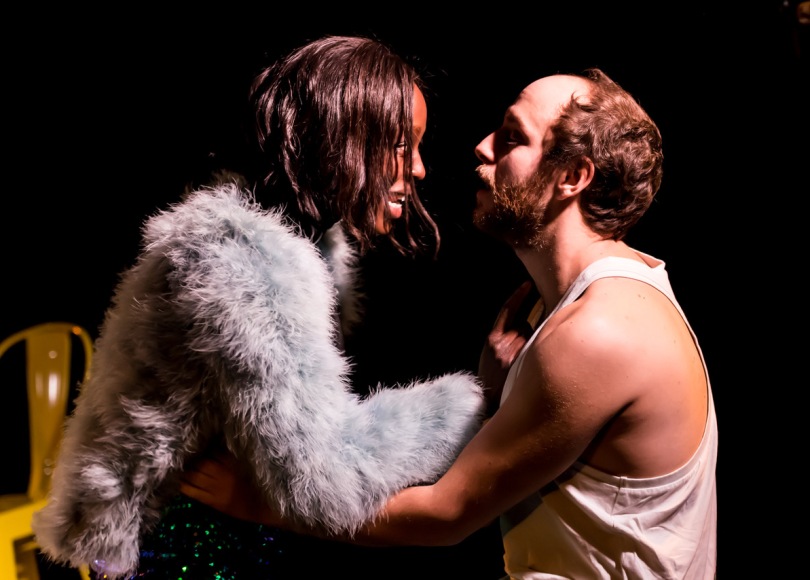 Anima Theatre Company’s Blue Departed is an unashamed look at addiction, death and carrying on. Dante and Beatrice are two addicts. Now Beatrice is dead and Dante is going through his many circles of hell to get clean with the help of his brother.

Through flashbacks, we see happier times; their first meetings, the fun they had whilst high and the lows. The sheer boredom of sobriety, a miscarriage. Serafina Cusack’s script is no holds barred. This isn’t a glamorous look at drugs but a frightfully realistic one, aided by intense lighting (Benny Goodman), sound (Joshua Jacob and Henry C Krempels)and intense performances from Mark Conway as Dante and Rebecca Layoo as Beatrice, who turn to drugs to feel something and eventually feel nothing at all. Krempels direction embraces the small space and the insular nature of addiction and trying to escape it.

Richard James Clarke as Dante’s younger brother is the figure of reason, desperate to see his brother live a healthy life and the tragic death of Beatrice he goes through his own journey of grief, loss of patience and kindness as he tries to help his brother get through the withdrawal and come down.

There are some really beautiful imagery and colours in this production; a line about how her favourite colour was orange but it was the opposite of blue-the blue of ambulances and the harsh lighting that hid veins gives a real sense that drugs dominate these people’s lives rather than a recreational activity.

Blue Departed was on until 27 January 2019 https://vaultfestival.com/whats-on/blue-departed/