A first-rate piece of children’s theatre, this retelling of the familiar myth (by playwright Katrin Lange, directed by Cressida Brown) challenges a young audience to reflect on whether to believe everything they’re told. Icarus, eldest son of the master builder Daedalus, leaves his mother and younger siblings to go in search of his father, from whom nothing has been heard since he went to Crete to work for King Midas.

The play (originally in German by Katrin Lange) is full of wonderful hat-tips to the myth of Theseus and the Minotaur (a knitting pattern, rather than a thread, holds the secret to the labyrinth), but completely reworks the tale, casting Icarus as the labyrinthine adventurer, and the Minotaur as anything but the villain. Icarus’ famous flight remains, but does not overshadow his heroism, and the ending is a happy one, courtesy of a slightly bizarre singing chorus of an octopus and some dolphins.

As former artistic director of the Unicorn Theatre (2011-2017), translator Purni Morell clearly knows her audience, and the language in which she chooses to tell the tale is simple, but compelling, and it is often easy to forget the age of the target audience. 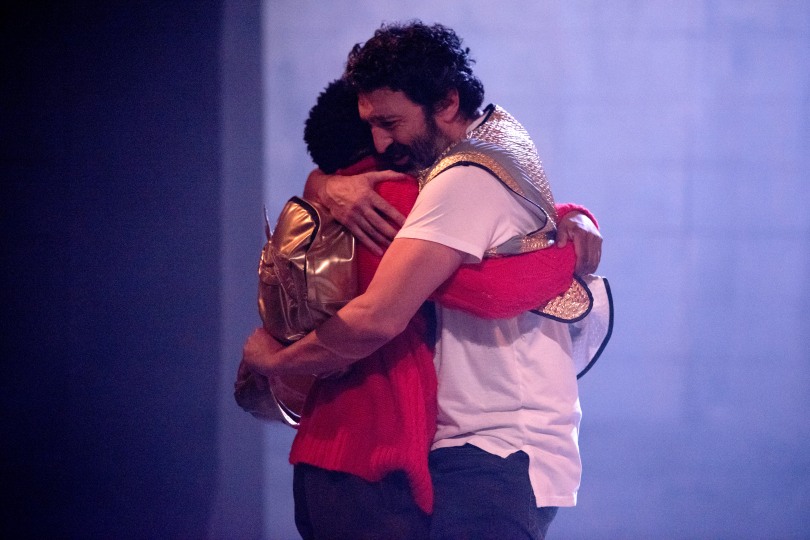 The set design (Lucy Sierra) was first class, taking us to a wonderfully brutalist concrete Crete (no pun intended?) which acted both as a fitting setting for a dictatorial Midas and as the imposing labyrinth. This was heightened by successful and somewhat playful lighting design (Ziggy Jacobs-Wyburn) and an atmospheric but entirely modern original score (Jon McLeod).

Supported by strong performances from Rayxia Ojo as Ariadne, Selva Rasalingam as Daedalus and Arinder Sadhra as Xena, Marshall Defender Nyanhete’s leading performance as Icarus was entirely captivating. His small stature, huge eyes and well-observed mannerisms meant that he was utterly convincing as a young child. This contributed to his excellent rapport with the kids in the audience in some brief moments of interaction (despite some near unforgiveable attempts at dabbing). Casting a child (via a recording) as both the narrator and the Minotaur added a wonderful dimension, and again captured the younger members of the audience in a way that perhaps an adult could not. The only slight jar was the portrayal of the evil King Midas, with a Dalek-esque voice changer, which felt decidedly Not For Adults.

This show is marketed towards the 8 – 12 age range, and gauging from reactions on the night it reaches that audience very well. However, in its engaging tale, clever design and in the lead’s captivating performance, there is plenty to delight the adult.

Icarus is on until 10 March https://www.unicorntheatre.com/Icarus