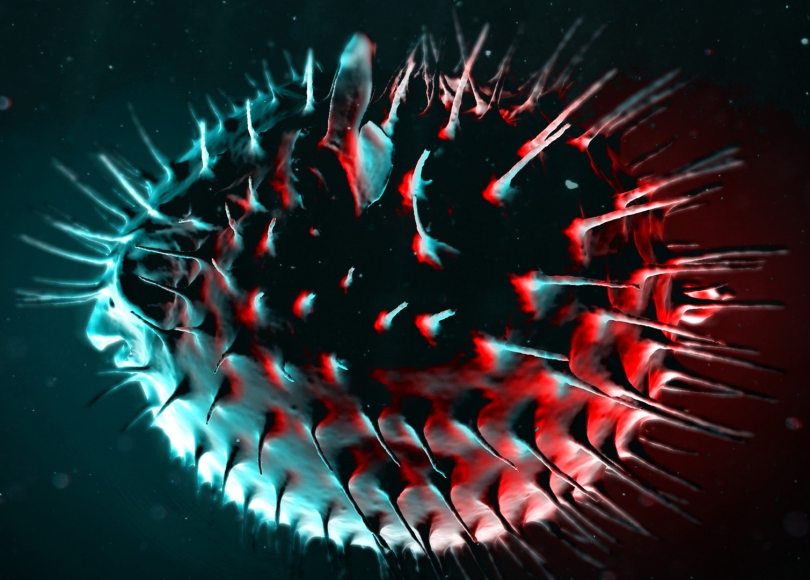 Pufferfish is inspired by the serial killer Jeffrey Dahmer, a man who killed 17 young men from 1978-1991. Dahmer, much like Ted Bundy, didn’t look like a monster but his acts were horrific, necrophilia, preservation of corpses and cannibalism.

Pufferfish by Nick Bruckman makes its UK debut after a run at the National Dutch Festival and this is a tale at not only the man the behind the murderer, his victims and the loved ones they left behind. The casual homophobia of 1980s America means that the assumption is that nobody cared or loved Dahmer’s victims but Asha Reid’s Anne, a woman who doesn’t understand her brother’s lifestyle but loves him nonetheless, embodies all those ‘normal’ victims of Dahmer (Jackson Millner) who get caught in the crossfire of these murders.

Charlotte Espiner’s faux marble design serves many purposes; the kitchen that Chris (Arian Nik) and his sister Anne eat apple pie, the aquarium Dahmer shows off to his victims and the mausoleum of his preserved bodies. It is very striking in a small space but there were times where I wasn’t sure the translation worked; was Chris a specific victim or combination of them all? What was Anne’s purpose? Her scenes were the weakest, despite a fun and thoughtful performance from Reid as a woman remaining in an undesirable area in case her brother ever came back.

Nik and Millner have great chemistry as the victim and the murderer. Buckmann’s script implies that Dahmer’s murders were part of the risk of gay sex in 1980s America, where AIDS fear dominates. If these men feel they were going to die anyway then why fear a man like Dahmer? Millner’s uncanny resemblance to Dahmer gives a better understanding of why men went back with him; handsome and soft-spoken he had lived a normal life. Nik as Chris (and other victims) could easily be the man candy but he gives a face and voice to these near anonymous victim, listed at the end of this play because like so many victims they are never remembered.

Ng Choon Ping’s direction adds to the claustrophobia, you want to look away as apple pie becomes flesh, as Dahmer describes his necrophiliac acts but you cannot because it is all so visually striking and so centered on this charismatic man, who wants to change but simply cannot.

Pufferfish is a play that makes you realise, much like Ladykiller, why these crimes happen and why get away with it for so long.

Pufferfish is on until 10 March https://vaultfestival.com/whats-on/pufferfish/